PITTSBURGH -- An hour and a half before the Pittsburgh Steelers kicked off against the Cleveland Browns on Sunday, Rich Marsili and Rusty Sergent stood on the sideline at Heinz Field wearing James Conner jerseys.

They weren’t just any Conner jerseys. They were customized with a special message where Conner’s last name would normally be stitched.

James Conner met Rich and Rusty before today's game. Rich was diagnosed with a rare sarcoma a year ago and Rusty tweeted to Conner to set up the meeting. (via @bepryor) pic.twitter.com/b8ZjIshO5c

Marsili was diagnosed a year and two months ago with a rare — and serious — form of cancer. He ordered the jersey a couple of months ago. Sergent, his best friend, followed suit and ordered one with his own spin on the spelling.

The two were on a bucket-list boys’ weekend trip, put together by their wives for Marsili, a lifelong Steelers fan.

James Conner met Rich and Rusty before today's game. Rich was diagnosed with a rare sarcoma a year ago and Rusty tweeted to Conner to set up the meeting. (via @bepryor) pic.twitter.com/b8ZjIshO5c

They were standing side-by-side next to the Steelers’ tunnel when another No. 30 emerged.

This one was the real Conner, but as a cancer survivor, he agreed wholeheartedly with Marsili’s and Sergent’s jerseys.

As Conner hugged them both, tears flowed down Sergent’s face as Marsili smiled in disbelief.

“Keep up the fight,” Conner told Marsili. “Keep it up.”

Trying his best to keep his emotions at bay, Marsili got choked up relaying Conner’s message.

“It means something from a guy who’s been there, done that,” Marsili said.

“It was inspiring. It’s just inspiring to see somebody that has gone through it and won. He won the fight.”

A couple of months ago, Marsili was looking for a new Steelers jersey, and picking Conner, who was diagnosed with Stage 2 Hodgkin lymphoma on Thanksgiving in 2015, just made sense.

“I just felt like I had some common ground with Conner after what he’d been through and what I’m going through,” Marsili said. “So I got the Conner jersey and put that on the back. It’s funny, my mom calls me, she’s like, 'You know you spelled [the F-word] wrong.' I’m like, 'Yeah, Mom, I know how to spell it.'” 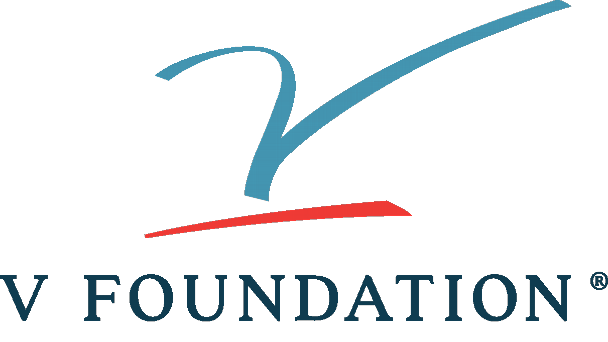 V Week is Dec. 3-14. Donate to the V Foundation for Cancer Research.

Bid on exclusive game-worn and autographed sneakers in the Kicks to Beat Cancer auction.

Less than a day before he arrived at Heinz Field, Marsili had no idea he was going to meet the owner of the No. 30 jersey. He thought he was just fulfilling a lifelong dream by attending a Steelers game. But Sergent wanted more for his best friend.

Sergent tweeted to anyone who might have a connection to Conner. Then he reached out directly to Conner.

“James meet my best buddy Rich who diagnosed with a rare untreatable sarcoma,” he wrote on Nov. 22. “I’m fulfilling a bucket list wish for him and coming your home game with the browns next week. I bought field passes, wondering if you could see him and give some encouragement. Thanks”

An hour later, Conner wrote back saying he wanted to meet him and retweeted Sergent’s original message.

“It was perfect timing,” Conner said. “People tweet me all the time, and I saw it and so I quote tweeted it and said, ‘Let me meet him.’ They put everything else together, with the sideline passes and everything. We made it happen. All I had to do was come out the tunnel to meet him.”

Because he’s not on Twitter, Marsili had no idea about Sergent’s plan. His friend kept it a secret until the day before they were set to go to the game. Nine days before he was diagnosed with cancer, Marsili swam 2.4 miles, biked 112 and ran 26.2.

The Chicago-area resident and Steelers fan dating back to the Steel Curtain days postponed a biopsy until after he competed in the Chattanooga Ironman on Sept. 30, 2018.

When the results of the biopsy came back, Marsili high-fived his wife.

He thought the pain in his chest and lungs was mesothelioma. Instead, it was a sarcoma.

“I was afraid they were going to tell me it was mesothelioma because that’s a death sentence,” Marsili said. “Then they came back and said it was a sarcoma. ... We thought that’s good news. I didn’t know how bad sarcomas were. It was kind of ignorance is bliss.”

Marsili quickly learned his particular sarcoma, a rhabdomyosarcoma, was a rare form of cancer that forms in soft tissue. The tumor was attached to his diaphragm, pushing on his right lung.

Doctors removed the tumor, but it grew back within two months. It also appeared in other places, too — his ribs, his back, his heart.

He did one type of chemotherapy, but it didn’t work. Instead, the tumor grew.

He’s on a second treatment now, and it seems to be “holding it at bay,” according to Marsili.

Conner’s cancer fight was similar. As he rehabbed from an MCL tear at Pitt, tests revealed tumors growing in his chest and neck, and he underwent six months of chemotherapy before being declared cancer-free prior to the 2016 season.

Since entering remission, Conner has used his platform to connect with others fighting cancer.

“I know what it’s like,” Conner said. “I know what he’s going through. So if I can get his mind off of it for a quick second, then it’s worth it. It’s one of those priceless moments where it’s a genuine reaction and just shows the position I’m in to be able to inspire others like that. I don’t take it for granted.

“It’s all God’s plan, God’s work. He let me be a survivor. I just try to help other people become survivors, too.”

Before he left Sergent and Marsili, Conner stopped to sign Marsili's jersey.