TAMPA, Fla. -- The third episode of the HBO series "Hard Knocks," which is chronicling the Tampa Bay Buccaneers, aired Tuesday night. Here are highlights from the show:

"I definitely went through a journey last year," Martin said. "Everybody has tough times. Everybody reaches a low point. I stood up and said I needed help, and definitely turned a negative into a positive. Because right now, I'm definitely a better person because of it."

Martin will miss the first three games of the season to finish serving a four-game suspension that he began last year.

"I'm getting to the vet years and I've just got to start acting like a vet," Martin said. 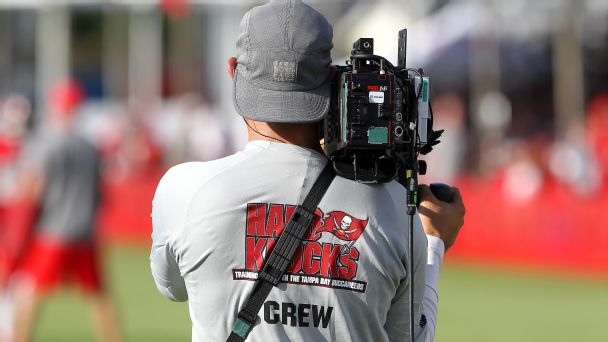 It's the Bucs' turn in front of the cameras for "Hard Knocks," chronicling training camp ahead of a season with high expectations.

Martin acknowledges that as a veteran, he has to set a better example for his younger teammates, such as rookie Jeremy McNichols. "They need to look up to somebody, a mentor," Martin said.

In the second preseason game, against the Jacksonville Jaguars, Martin exploded, averaging 6.0 yards per carry.

Maurice Fleming gets his shot: Rookie Maurice Fleming, an undrafted free-agent cornerback, has been thrown into the deep end, literally and figuratively.

He can't swim. He's also out doing agility drills before sunrise. He's had the coaching staff raving about his big-hitting style. When he finally got his opportunity to show it in the second preseason game against the Jaguars, his knee gave out.

He attempted to play through it, but was virtually playing on one leg. At one point, he fell down without contact. He broke up a pass in the corner of the end zone on the final play of the game to keep the Jags from winning. The tension built up when head athletic trainer Bobby Slater tells him to "be patient."

It's a camp-ending injury, and he'll need at least a month to recover, so he's waived/injured.

"You didn't do anything wrong. This is a medical issue," said coach Dirk Koetter, who praised Fleming for playing through the injury. "You have the right qualities, but this is a health issue."

An earful for Jameis: QB Jameis Winston nearly threw a pick against the Jaguars as he was pulled to the ground. He should have taken the sack and Koetter was livid.

Winston nodded and took it.

Where are the fights? There were three fights in the second joint practice against the Jaguars, but curiously, none is featured in this episode. (Hey, if Koetter said, "I don't know what you're talking about," they must not have happened).

It's no secret -- fans of the show look forward to the fights. More importantly, the fights show players have reached a tipping point after a sluggish performance the first day, in a performance Koetter called "f---ing pathetic."

That served as a catalyst for a strong second day, and it truly captured players taking their coach's words to heart.

Instead, we see Gerald McCoy ordering a food truck for his teammates outside the team hotel and defensive tackle Chris Baker having a rather intimate moment with a palm tree (FYI -- it should probably come with the type of disclaimer you see on a pair of solar eclipse glasses).

Another moment missed by the crew: The epic prank that the offensive linemen pulled on rookies Korren Kirven and Cole Gardner at the annual rookie dinner. The veterans convinced the servers at Ruth's Chris to hand the rookies a fake $27,000 tab. It ended up being $3,000 and the vets paid for it all.

Baker then turned to a group of fans along a barricade and said:

"Y'all are crazy. We're out here destroying y'all. You have got to be the angriest fans in the world 'cause every year y'all gonna get at least three wins."