Two weeks ago, G Akash was confirmed as a Grandmaster by FIDE, the world chess governing body. That the feat didn't cause much of a ripple even in a time starved of sports-news was down partly to chess's niche status, but also because of this: an Indian becoming Grandmaster, while still as prestigious and commendable, was no longer extraordinary or unusual.

It took two decades for India's Grandmaster count to go from 1 (when Viswanathan Anand became the country's first GM, in 1988) to 20. By contrast, there have been 21 new GMs in the last three years, eight of them between ages 10 and 19.

It's a figure that will raise eyebrows whether you're a veteran fan reading the chess column in the newspaper or part of the Twitch-streaming younger generation. For those in the first group, the rapid growth is surprising; for the second, so inevitable have been the events of the past couple of decades it's a surprise people are even talking about it.

RB Ramesh was one among the first group, and having coached eight players to their GM norm, has seen the second group up close. As a teen in the 1980s, his morning routine during World Championship matches was to wait for the newspaper and, once the family elders were done with it, run his scissors through the chess match report in the sports page to extract a week's worth of study material. The minefield of information was then neatly glued in a notebook alongside similar collectibles, the notations underlined, and the moves replicated on his chess board.

For Ramesh, Anand becoming India's first world junior champion in 1987 wasn't just one of the reasons he took to chess. It was, he stresses, the 'only' reason -- much like many others in India, who started turning to the sport after Anand stepped on to the world stage. "I started playing when I was 12," says Ramesh, who in 1995 became the second GM from Tamil Nadu after Anand. "By chess standards, I was old."

It's hardly an exaggeration. In 2018, Ramesh's student R Praggnanandhaa turned Grandmaster at 12 years, 10 months and 13 days.

For those who've followed chess, India's growth super surge, while spectacular, isn't a surprise. The building blocks are clear. "The primary drivers are advanced methods of coaching, high levels of participation and also increased strength at the top," Anand tells ESPN. "More people taking up chess, which is also pushing more players higher, it's a sort of pyramid effect."

Access to quality coaching within the country has been a game-changer. A few decades ago, if an Indian wanted to train under a GM, the only choice was to go abroad. "I grew up sparring with fellow club players and coaches at the Alekhine club in Calcutta who knew as little or as much as the rest of us," says Surya Sekhar Ganguly, who became a GM in 2003. "I remember my first GM interaction was with Russia's [Yevginiy] Vladimirov during a coaching camp in India. It was right before I turned GM myself. During his sessions, some of us realized that we were on the verge of becoming GMs and yet didn't know basic rook-pawn endgames. It was like signing up as an F1 driver without an idea of how the paddle shifts work."

The concentration of chess talent in Tamil Nadu - 36 per cent of the 66 GMs belong to that state - also has a cascading effect. It's been a carefully orchestrated growth over the years, with the parent body, All India Chess Federation registered in Chennai in its early years and the state and district associations putting together regular tournaments.

Tournaments in the country too, have grown in numbers. From barely a couple of norm events in the initial years, the All-India Chess Federation now hosts up to a dozen events every year where players can pick up International Master and GM norms. Last year, India hosted 305 tournaments with a total prize fund of approximately Rs 9 crore (approx. US$ 1.2 million). Events in large numbers spawn greater participation and a larger working group of active players. "Since tournaments in the country were fewer back then," says Ramesh, "most of us weren't very ambitious. Turning IM or GM wasn't even on our radar because we knew it meant having to travel abroad extensively for tournaments."

What's also helped is India's march into the IT world. Chess may not be a TV sport but it's uniquely suited for the internet era. All one needs is a net connection to play against a wide group of players across the world. No matter what time of the day one logs in, there's always a faceless chess buff at the other end, waiting for an opponent to be paired off with. You can play endless games for free, make reckless sacrifices, be mated by cryptic user-handles and be judged by none.

It's a flat world, very different to what Anand and his generation grew up in, as he's related in detail in his autobiography. The emerging Indian player is on par with his peers anywhere in the world, with little disparity in what each can tap into - livestreams, analysis, commentary, games - no matter where one is based.

The GM title, held by players for life, sits at the top of the 'Master' ladder - above Candidate Master (requiring an Elo rating of 2200), Fide Master (Elo rating of 2300) and International Master (three norms and Elo rating of 2400). To be awarded the title of GM, a player must cross the 2500 Elo rating requirement in addition to three norms. 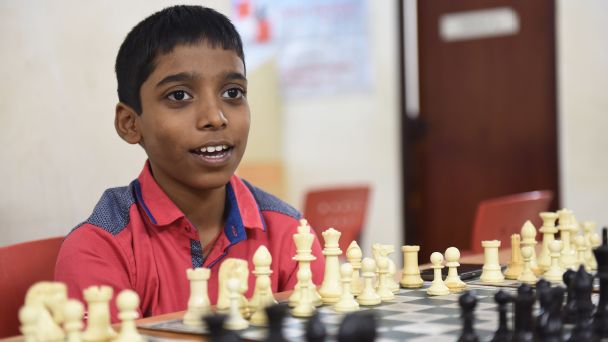 To earn a norm, a player must:

It's easy to get swayed by the sheer number - 66 GMs - but it offers only one parameter to measure India's growth. In addition to the quantity, what's needed is quality numbers: more Indians in the top 100 and Indians in the "Super GM" club of 2700+ rated players and winning big tournaments. "The GM title is clearly an important milestone," says Anand, "but it should not be seen as the end of the journey." More players need to break into the higher reaches and compete for major titles to add more meaning to the impressive GM figures. It's a way of telling that the numbers add up and mean business.

Of the 66 GMs, only four - Anand, Vidit Gujrathi, P Harikrishna and B Adhiban - are currently in the top 100. At 50, Anand continues to be India's top ranked player at No 15 in the world.

There are equally clear reasons for the relatively low conversion rate of India's GM blitzkrieg into a bunch of 2700-something toting players, gatecrashing the biggest events in herds. One, the lack of super tournaments in the country. The only one staged in India is the Tata Steel Rapid and Blitz event in Kolkata. The AAI International Grandmasters event in 2011 was the last time a Category 17 event, a closed, invite-only tournament among players in the 2600 bracket, was held in India. It had then women's world champion Hou Yifan, world junior No 1 Fabiano Caruana, Wesley So and Indians K Sasikiran and Parimarjan Negi in its field.

Adhiban offers a sobering example of the difference between the Indian story and what's happening elsewhere. He contrasts his growth trajectory with Dutch GM Anish Giri, two years apart in age, to draw the difference that playing regularly against the top group of players can offer. In fact, Adhiban who turned GM in 2010, only played Anand for the first time two years ago at the Wijk Aan Zee tournament. The game ended in a draw.

"In January 2008, I had a rating of 2401 and Giri was at 2344," says Adhiban, "Our career graphs since have taken wildly different paths. He's been continually competing against the top group of players while I've had to count the cost while planning for tournaments overseas. Who you play against can determine what kind of player you eventually become."

AICF though doesn't view hosting a super tournament as a pressing necessity. "It's just too much expenditure for the benefit of far too few players," says its secretary Bharat Singh Chauhan. "It could cost us around Rs. 3 crore (approx. US$ 400,000) to hold just that one event. We can use those kinds of funds instead for several dozens of regular tournaments that will help bring more kids into the sport. We did try though for sponsors to host super tournaments but haven't had much luck yet." The focus for the Indian chess body is to broad-base and popularise the sport in the mid to lower reaches. The top players or those on their way up there, it suggests, are in a position to fend for themselves.

"India has produced a world champion, very few countries can boast of such a success story," says FIDE's director-general Emil Sutovsky. "But there is a general feeling that many talented Indian players could do even better. The lack of super tournaments in India is an important factor and in his early years, even Anand had to relocate to Europe to be able to participate in more strong events without having to travel extensively."

Other top chess nations have lessons to offer. Russia, long chess's leviathan, spends US$ 7-10 million on the sport and hosts at least four super tournaments annually. China, driven by the support of the ruling communist party, has invested heavily in the sport in recent times. This year, for the first time China won both the men's and women's divisions at the Chess Olympiad. The US chess resurgence over little more than a decade has been largely led by deep-pocketed Saint Louis native and chess fanatic, Rex Sinquefield. The Saint Louis chess club that he founded in 2008 annually hosts one of the strongest events in the world, flocked by top players. The US currently has 10 players in the top 100, four of them in the top 20, including world No 2 Caruana.

Finances to journey from a mid-level to a top player too can be a strain. Foreign tournaments alone take up a sizable chunk of what sponsor assistance might cover. There's still coaching fees to pay for. It costs Adhiban 60 euros (approx. US$ 68) an hour to train with a foreign coach. For fellow Indian Vidit, second-highest ranked player in the country after Anand, a six-hour session of online coaching costs 400 euros (approx. US$ 456). During the lockdown, he's been largely training seven days a week, two hours daily. Both Adhiban and Vidit are employed by PSUs and have some family funds and prize money earnings to draw from. For many other Indian GMs though without regular jobs, who are still in the lower reaches of a 2600 rating, it could often be a toss-up between spending on training or playing. Whichever one they pick, it's upended by the absence of the other.

"It's after they turn GMs, that players need the financial assistance" says Pravin Thipsay, who was the first Indian to earn a GM norm in 1985 (before Anand). "GM is only a title. It doesn't promise you an income or livelihood. It's where the fraternity needs to step in, in India if we don't want players to quit the sport. Players in the 2600 range need to spend around 20 lakhs to be able to travel for tournaments, hire a coach and move up the ladder. Presently in the country, that support system seems to be largely missing."

At the end of the day, the thriving, rising GM numbers in India should be of comfort. It gives the country a wider chance to aim higher. GM numbers, Anand ventures, could possibly touch the 200-mark by the end of the decade. "I learnt to move chess pieces because of Anand," says Ramesh. "I've long retired but he's still out there at 50, competing. India should stop looking for the next Anand. It's like expecting Switzerland to come up with the next Federer. It's an unfair ask. Anand is an exception. We need to work with what we have - make our average players stronger and our strong players, beasts. The rest will fall in place."