From the veteran Mary Kom to the first-timer Neeraj Chopra, India's athletes struck gold, silver and bronze on a medal-filled Saturday. Shooter Sanjeev Rajput set the tone early on with gold in the 50m Rife 3 Positions, and Manika Batra registered a three-peat by adding the women's singles TT gold to the medals she had already won in the women's doubles and the team event. Here's a look at some of the day's key results.

Mary keeps her tryst with destiny

MC Mary Kom picked up the only medal missing from her cabinet - and made it the best possible one - by beating Kristina O'Hara of Northern Ireland to the gold in the women's 45-48kg category. There were also golds for Vikas Krishan and Gaurav Solanki. In all, the 12-member Indian boxing squad returned with a complementary set of three of each kind -- three golds, three silvers (Amit Phangal, Manish Kaushik and Satish Kumar) and three bronze medals (Manoj Kumar, Naman Tanwar and Mohammed Hussamuddin) from Gold Coast.

Indians in action on Sunday 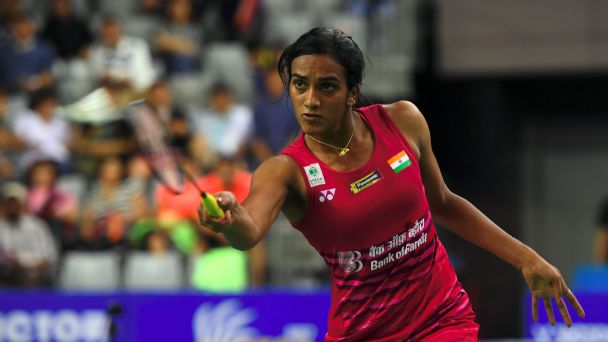 Neeraj Chopra won gold in the javelin throw event on Saturday after a best throw of 86.47m, making him the first Indian to win a medal in javelin at the Games. It also made him the third Indian man and fourth overall to clinch an individual athletics gold, after Milkha Singh in 1958, Krishna Poonia in 2010 and Vikas Gowda in 2014.

In a high quality display, his lowest throw came at 83.48m -- more than the best throw of Australia's Hamish Peacock, who claimed the silver with 82.59m. Neeraj, 20, led from the front after a throw of 85.50m with his first attempt. His second throw was a foul, but that first throw kept him comfortably in the lead, ahead of Grenada's Andreson Peters, who was in the silver medal position with a best throw of 82.20m after two attempts.

Manika Batra was a big part of the Indian women's team's historic gold in table tennis earlier in the week, flummoxing the favoured Singaporeans with her unorthodox backhand that had completely foxed World No.4 Tianwei Feng. Batra capped off a remarkable performance by beating Feng in the singles semi-finals early on Saturday, before beating Mengyu Yu, also of Singapore, in the final to become the first Indian woman to win a singles gold. Manika, who has also lifted the women's doubles silver with Mouma Das, isn't done yet -- she and Sathiyan Gnanasekaran will face the all-Indian pair of Sharath Kamal and Mouma for the mixed doubles bronze, a match that begins at 5am IST on Sunday.

Vinesh Phogat put in a commanding performance against 2010 bronze medallist Jessica MacDonald of Canada to pick up one of two golds for India on the wrestling mat on the final day of competition. Sumit Malik would win the gold in the men's 125kg category thanks to his opponent's injury in the final, but there was disappointment for Sakshi Malik in the women's 62kg category, as she dropped two bouts against wrestlers from Canada and Nigeria, and had to be content with bronze. Her brother-in-law Somveer picked up bronze in the men's 86kg, though, and that meant all of India's 12 wrestlers in the fray managed a podium finish, with five of them getting gold.

Badminton's dream final is on

The singles draw was perfectly laid out for an all-India final, and PV Sindhu and Saina Nehwal delivered on that promise by winning their respective semi-finals. Saina was the only one among them who was stretched in any of the matches, dropping one game to Kirsty Gilmour of Scotland on Saturday.

Newly crowned World No.1 Kidambi Srikanth also made the men's singles final, where he will face Malaysia's Lee Chong Wei, the man who held the top ranking for a record 199 consecutive weeks not long ago. India also picked up a bronze in women's doubles through N Sikki Reddy and Ashwini Ponnappa. India are assured of another medal on Sunday in the men's doubles, where Satwiksairaj Rankireddy and Chirag Shetty will face the English pair of Marcus Ellis and Chris Langridge.