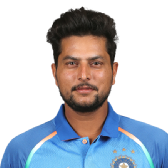 India tour of Ireland and England 2018

India win by eight wickets to take the series lead and it's been a thumping performance. Once they broke England's opening stand India never looked back. Kuldeep Yadav the man who did most of the damage but India's other bowlers ensured England could never get away from them with the bat. Jos Buttler and Ben Stokes managed to build a middle-order platform, but there was no late explosion this time. Then with the bat it was a cakewalk for India, led by another masterful hundred from Rohit Sharma and a lovely innings from Virat Kohli. They have laid down yet another marker. Will England be able to bounce back at Lord's in two days?

Meet: "@Mel... the fact that India restricted England to such score without their best death bowlers (B gang) is quite impressive. All kudos to young Kuldeep but, Indian batsmen are playing fluently in this series as well. Ability to play spin is one factor, but not the only factor."

Steve: "And to think just a week ago English sport looked so pink and fluffy and filled us with a warm fuzzy feeling......sigh."

Allen Turing: "With all the talks of Merlyn waving his magic, England are missing one major point here. They are trying too hard to play the spin, rather than picking the spin out of the hand. The moment you start playing off the pitch, well no explanation needed."

We'll bring you the presentations shortly...Eoin Morgan "Certainly not our best day we've had here, full credit to India they completely outplayed us. Playing against spin is a challenge we will hopefully continue to improve on. We might need to sit in or a better way to play him...think Lord's will be different. He [Kuldeep] extracted more turn than any other spinner. Our playing against spin will have to improve. To be honest, between now and the World Cup we need to expose our areas of weakness and this is one of them."

Virat Kohli "As clinical as it can be. We knew it was a really good wicket but wrist spin in the middle overs would be tricky. When they have 10 overs then know they have the skills to have an impact. Kuldeep was outstanding, I don't think I've seen a better ODI spell in a while. We want him confident because we know he can be a matchwinner - 50 over cricket, if you don't get wickets it's very difficult. [Kuldeep for the Test side?] There might be a few surprises there, we have a few days to pick the Test side. Looking at the England batsmen struggling we might be tempted to do that. The weather has been lovely, very welcoming. It's been good so far. It doesn't feel like we away from home. There's some tough cricket in front of us."

The Man of the Match is Kuldeep Yadav "For me it's a big day. I started pretty well, luckily I got some early wickets. For me it doesn't matter where I'm playing. There was a little bit of turn. After the first over I felt in the game. If you are using your variations it's more difficult for the batsmen. I'm hoping for the Test squad, let's see."

So first honours to India in the one-day series, as it was in the T20s. Sid Monga's report will be here shortly. The series now moves to Lord's on Saturday. We'll be back to bring you all the action but for now, from Miller and Gnasher, it's goodbye and thanks for joining us.