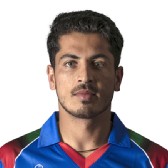 Mohammad Nabi's Mis Ainak Knights chased down 155 with a ball to spare to defeat Rashid Khan's Band-e-Amir Dragons in the Shpageeza T20 League final in Kabul. Knights ensured Rashid went wicketless in his four overs, and although Mujeeb Ur Rahman plucked two wickets, they went after the other bowlers to lift the title after taking the chase down to the penultimate ball.

Knights needed 21 off the last three overs and their captain Nabi struck back-to-back fours off seamer Batin Shah to tilt the scales. But Batin hit back as Nabi holed out off the next ball for 30 off 21, but Sharafuddin Ashraf, the new man in, found the boundary off his first ball. Then, with Knights needing a mere five runs off 12 balls, Mujeeb got rid of Ihsanullah, and Shafiqullah Ghafari was run out for a duck, leaving them needing four off the final over. Tariq Stanikzai, too, was run out for a duck, but Ashraf and Fazal Niazai ushered Knights home in a fairly tense finish.

It was 17-year-old wicketkeeper-batsman Rahmanullah Gurbaz who had set the tone for the chase with 36 off 25 balls in a 71-run opening partnership with Noor Ali Zadran (42). No. 3 Ihsanullah and Nabi took charge of the innings after the openers fell, but a late-middle-order wobble tightened the chase. From 142 for 2, Knights slid to 152 for 6, but their lower order eventually bailed them out.

Having been sent in earlier in the day, Dragons lost their openers Rashid and Javed Ahmadi in the Powerplay, but middle-order contributions from Imran Janat, Afsar Zazai and Shawkat Zaman gave their innings direction; Janat top-scored with 32 off 26 balls, including three fours and a six. Dragons were 109 for 4 in 15 overs, but they took 45 off the last five of their innings to end with 154 for 7. It would not be enough against Nabi's men.

Nabi had played his part with the ball as well, claiming 1 for 34 in his four overs, while seamer Naveen-ul-Haq was the pick of the Knights bowlers with 3 for 41.

Knights' Noor Ali Zadran was the top-scorer in the league with 354 runs in seven innings at a strike rate of nearly 135, while Dragons' Nijat Masood ended as the top wicket-taker with 11 scalps, despite playing only six games.