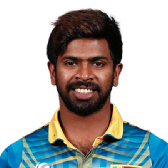 Sri Lanka have inflicted upon England the heaviest defeat - in terms of runs - in their ODI history to clinch a morale-boosting victory in Colombo. Despite not having won any of their five most recently completed ODIs, Sri Lanka took advantage of a fine batting track and a slightly under-strength England attack to produce a vastly improved performance with the bat.

And, after their top four all scored half-centuries - the first time since 1998 each of Sri Lanka's top four had passed 50 in the same ODI innings - in producing their highest-ever ODI total against England, they had them three down within 10 balls of their reply to all but settle this match as a contest.

While the weather had the final word - of course it did; it's been the most consistent performer in the series - and prevented the possibility of England being bowled out within 27 overs, the fact that Duckworth-Lewis-Stern Method was utilised to ascertain the result should do nothing to dilute the chasm that was the margin of victory: 219 runs is a thrashing. Only 21 times has an ODI been decided by a larger run margin: about half of those results were from games between Full Members and Associate Members.

There will be those who suggest England were punished for a certain amount of complacency ahead of this game. And it is true, in resting their captain, Eoin Morgan, and opening bowler, Chris Woakes, to provide opportunity for other players, they took decisions they may well not have done had the series not already been decided ahead of this match.

It is true, too, that some of England's fielding dipped way below the standards they have set in recent times. Certainly Tom Curran's dropping of Dinesh Chandimal, at midwicket, was uncharacteristic and expensive (Chandimal had 6 at the time), while Moeen Ali also missed a relatively straightforward chance offered by Akila Dananjaya in the last over of the Sri Lanka innings. Not since the defeat in Scotland in June have England looked so off-colour.

But to focus on England's lapses would be to fail to recognise the marked improvement in Sri Lanka's performance. In thrashing their highest total in this format since they scored 377 against Ireland in June 2016, they passed 300 for only the second time in their 31 most recent ODIs.

While Dickwella contributed the innings he had been threatening all series and Samarawickrama produced his maiden ODI half-century, it was, perhaps, the form of Mendis that may prove most relevant. He is expected to play a crucial role in the Test series but came into this match having scored 0, 0, 0 and 5 in his four most recent ODI innings.

As it was, he struck the ball admirably cleanly in hitting six sixes - including two eye-catching drives back over the head of Ben Stokes and two in successive deliveries from Tum Curran - in reaching 50 from just 30 balls.

It may prove an important innings for Chandimal, too. His struggles to bat at the tempo required in modern ODI cricket have been a feature of his recent innings but here he reached 50 at a strike rate better than a run a ball for the first time since The Oval in June 2016. His final score - 80 - was his highest in ODIs since August 2016.

None of Mark Wood, Liam Plunkett or the Curran brothers - playing international cricket together for the first time; the first time brothers had played international cricket together for England since Adam and Ben Hollioake did so in 1999 - will have given their World Cup selection much of a boost with this performance. Sam Curran conceded four fours in his second over - including three in succession to the admirably aggressive Samarawickrama who drove both over and through the field sweetly - and, like his brother, conceded well over seven an over throughout his spell.

Plunkett, meanwhile, looked a little rusty - his average pace dropped below 80 mph (to be fair, he bowled quite a few cutters in a bid to stem the flow of runs) in a spell that cost 8.80 runs an over. While Wood bowled with decent pace - he touched 90 mph at times - he conceded five wides and seven fours as Sri Lanka rediscovered their fluency in dramatic fashion. The 107 England conceded in the first 15 overs was the most scored off them since South Africa made 111 in February 2016.

They were given a lesson in harnessing the new ball by the Sri Lanka seamers. Pitching the ball full, hitting the pitch hard and generating enough movement to expose England's poor footwork and pushed bats, they had them three down in minutes.

Kasun Rajitha's swinging yorker accounted for Jason Roy, before Dushmantha Chameera had Alex Hales and Jos Buttler prodding at deliveries that left them outside off stump. While Ben Stokes and Moeen Ali briefly threatened to mount some sort of defence in a stand of 79 in 11 overs, the damage inflicted was already too deep.

To see England's lower order collapse against spin was to be reminded of a previous, grim era in their ODI history. If they needed any wake-up call over the standards required to prosper at this level, a resurgent Sri Lanka provided it.