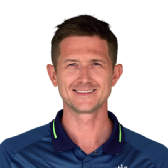 Jason Roy - dropped three times - thwacked 69 off 36, Moeen Ali smote 27 off 11 while the lower-middle order rallied, and England lurched in fits and starts to 187 for 8, which would prove 30 too many for Sri Lanka.

The target was imposing enough by itself, with only one greater total having been successfully chased at Khettarama. But when Joe Denly, playing in his first England international in almost nine years, removed both Sri Lanka openers with his virtually non-turning legspin, Sri Lanka's pursuit was seriously imperilled. England's other legspinner - the main one - Adil Rashid then claimed three wickets through the middle overs to essentially seal victory for his team.

Between them, Rashid and Denly accounted for Sri Lanka's top five, and had them well behind the asking rate. Sri Lanka captain Thisara Perera slammed his way to 57 off 31 balls for the remainder of the innings, but his team had lost too much ground to make even that innings meaningful. The hosts limped, eventually, to 157 all out by the end of 20 overs, Denly claiming career-best figures of 4 for 19.

England, and Roy in particular, made their intentions felt in the very first over. Running down the pitch to Lasith Malinga, Roy thumped him over long-off for six second ball, before glancing the fourth ball to the fine leg boundary for four. Sri Lanka tried to target Roy with the left-arm spin of Amila Aponso, perhaps working off the theory that he was susceptible to that form of bowling early in his innings. It didn't work - Roy thrashed two fours off Aponso's first two balls.

The spinner would have more luck at the other end, in his second over, however, dismissing Roy's opening partner Jos Buttler, and Alex Hales in the space of four balls. That prompted a brief respite from Roy's onslaught - a period of about four overs when he did not hit a boundary. The big hits would resume soon enough, though.

The ninth over, bowled by Lakshan Sandakan, was the most eventful over of the innings, and perhaps the definitive one of the game. Batting at the time on 34 off 25 balls, Roy top edged the second ball, and sent a miscued slog-sweep high to deep midwicket. But the substitute fielder, Sadeera Samarawickrama, spilled the straightforward chance, after which Roy nailed a slog-sweep into the western stand. Fourth ball, another top edge, this one to Dasun Shanaka at long-off. That was also grassed. Last ball, Sandakan should have had Ben Stokes lbw as well, only for the umpire to deny him, and his team-mates to refuse the review.

Roy, who was dropped again in the next over, clobbered 34 runs off 11 balls after his first reprieve. Stokes made 24 off his next 21. Between these two innings and that of Moeen, who struck three sixes and a four off his first 10 balls despite having arrived in the 12th over with four wickets already down, England were powered to their daunting total.

Denly, who produced a useful 20 off 17 with the bat as well, might not have been the kind of bowler that worried Sri Lanka before this match, but he nevertheless was the first to push them off course, before Rashid truly toppled them later on. He slipped a ball under Kusal Mendis' ambitious slog-sweep with the last ball of his first over - Kusal making a return to single-figure limited-overs scores, after hitting a half-century in the last ODI. Niroshan Dickwella, who is perhaps the form batsman of this top order, was out in almost identical fashion in Denly's next over.

Dinesh Chandimal and Dhananjaya de Silva threatened to rebuild - even if Sri Lanka were already struggling in terms of run rate - but Rashid's arrival at the bowling crease the moment the Powerplay ended, swung the match decisively for England. He had Chandimal caught attempting a reverse-slog in his first over, then dismissed Kamindu Mendis and de Silva in the space of three deliveries in his third, conceding only 11 runs - no boundaries - right through his four-over spell.

Aside from Thisara's late fifty, debutant Kamindu's all-round performance might have been the only real positive for the hosts. Not only did he deliver both left-arm orthodox and right-arm offbreaks for the first time in an international match since 1996 (Sri Lanka's Hashan Tillakaratne had been the last to do it), his batting was also full of promise. In 14 balls at the crease, he struck three fours and a six, before eventually holing out attempting a slog-sweep. For now, his batting appears his foremost cricketing talent, even if the uniqueness of his bowling will command more headlines.