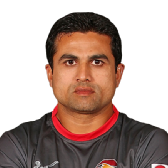 In a pulsating final decided in the Super Over, Winnipeg Hawks held their nerve to out-battle Vancouver Knights and, especially, Andre Russell, who could well have been on the park for West Indies at Port-of-Spain, if not for the knee injury he was managing post-surgery. Yet, as the final got tense, he batted like a man possessed, came out to bowl the Super Over, and everything asked of him and more, except win the game for his side.

Here's how it panned out: 54 needed off 19 balls in the Knights chase. Shoaib Malik has been dismissed for a fine 64. It is the final, no second chances. In walks Russell at No. 7, the Knights' last hope. Earlier in the evening, he had taken 4 for 29 to restrict Winnipeg to 192. He has been held back, even below Canada's Saad Bin Zafar, in the batting order. Now, it's all or nothing. So what does he do? Smash the ball like only he can - three fours, five sixes, all in 19 balls, to bring it down to three runs off the final ball.

Russell is on strike and but this time, he can only mistime an attempted slog towards long-on. The bowler can't collect the throw as they scramble for a second. They now try to sneak in a third, but the cover fielder backing up quickly hurls the ball to the wicketkeeper. Zafar is run out, Russell's heroics aren't enough, and the game is forced into a Super Over. The Hawks are still in it. Shaiman Anwar, whose 90 allowed them to make 192 and keep them alive in the first place, can still be a winner.

Now for the one-over shootout.

He's been clubbed for 50 off four wicketless overs earlier in the evening. Now, the pressure is on him and he sees the first ball of the shootout vanish for six. Russell is in his zone again, or he had never left it. Sana follows it up with two length balls to cramp the batsmen, before getting Russell caught at long-on. He's redeemed himself and Winnipeg need just 10 to win.

You'd think Russell wouldn't feature anymore in the game - creaking knees, managing his injury and all that. But no! He's bowling the Super Over. Having got the side to the doorstep of victory, only to see them fluff it, he's now got the chance to deliver the knockout blow.

He starts well, restricting the first two balls to singles, before he slips in a full toss which the batsman misses. All good for now, except, wicketkeeper Tobias Visee misses too. Four byes, game on. Chris Lynn is on strike. Four to get, three balls left, and he swings, gets a thick outside edge over short third man, and it races away for four and Winnipeg win. The Global T20 Canada couldn't have asked for a more fitting finale.

Earlier, after being asked to bat, the Hawks rode on UAE batsman Anwar's 45-ball 90, with eight fours and seven sixes, to get to a strong total at CAA Centre in Brampton. Anwar started with a 73-run stand with Lynn in the Powerplay before Russell got rid of the Australian for a 21-ball 37. But Anwar batted on, putting up another good stand of 81 with JP Duminy (33 in 27 balls) for the third wicket before falling ten short of his boundary when he miscued an attempted biggie in the 16th over. Russell's four wickets were complemented by USA pacer Ali Khan's 2 for 30 and local boy Rayyan Pathan's 2 for 24.

The Knights' reply started poorly, with Rayad Emrit reducing them to 2 for 2 by the second over, but van der Dussen (23 in 22) and Australian Daniel Sams (21 in 9) gave them stability before Malik, Zafar (27 in 26) and Russell took them to the doorstep of victory. The fell just short in the end, but only just.