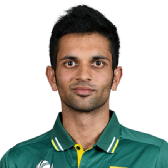 Temba Bavuma scored his 18th Test half-century in his 50th Test and held South Africa's middle order together after a strong start and a small wobble on the opening day against Bangladesh. South Africa's opening pair of Dean Elgar and Sarel Erwee took advantage of an indifferent Bangladesh new-ball performance to post their second successive century stand before they were dismissed within six balls of each other as Bangladesh found a way back. Then, Bavuma and Kyle Verreynne shared an unbroken 53-run fifth-wicket stand to leave South Africa in a position they will be fairly comfortable with despite the run-rate slowing as the day progressed.

On a differently coloured pitch to what is usually presented at Kingsmead, Mominul Haque chose to bowl first but Bangladesh would have wanted more wickets to justify his decision. Their seamers did not find much assistance up front, though there was some evidence of extra bounce later on, and South Africa seem to be anticipating turn later on. They included two specialist spinners in their XI for the first time in a home Test since 1970, with Simon Harmer returning from his Kolpak exodus after last playing for South Africa in 2015, to partner Keshav Maharaj.

After a 35-minute delay to sort out malfunctioning sightscreens, Elgar got South Africa off the blocks quickly and breached the boundary nine times in the first 12 overs as he took advantage of anything overpitched or wide. He brought up his fifty off 60 balls but not before Bangladesh had shown their first signs of bite. Taskin Ahmed beat Erwee, who spent most of the morning leaving well, twice and Mehidy Hasan could have dismissed him on the stroke of lunch when Erwee tried to slash him through the off side, top-edged, and was dropped by Litton Das.

South Africa went to the break on 95 without loss and Bangladesh with many questions but they surged back in the first hour of the afternoon session and took 3 for 33 thanks to a more disciplined approach. As Bangladesh adjusted to tighter lines, Elgar could add only seven to his score off 24 balls in the second session before he got a good ball from Khaled Ahmed, who found extra bounce. Elgar was late in trying to pull out of the shot and the ball took the edge to end the opening stand on 113. Five balls later, Erwee tried to cut Mehidy and under-edged onto his stumps.

With two new batters at the crease, Bangladesh would have been looking to squeeze South Africa but Keegan Petersen and Temba Bavuma were picture-perfect at first. Bavuma clipped Mehidy Hasan through midwicket for his first boundary and Petersen pulled Khaled in front of midwicket. With two compact techniques and quick runners at the crease, South Africa would have banked on their third-wicket stand to produce big runs, and Petersen was fortunate Bangladesh didn't review a chance for caught-behind when he was on 18 and Taskin Ahmed lured him into the drive. But he was then unfortunate to be run-out when Bavuma called for a run after dabbing the ball to point, where Mehidy dived, picked up and threw with one stump to aim at and Petersen was found out of his ground.

Debutant Ryan Rickelton scored his first runs in Test cricket off a reverse-sweep and showed aggressive intent after tea. He sent a wide Ebadot Hossain delivery through cover, then tried again but got an outside edge that sped through third man, and eventually fell on his sword when he tried to pull Ebadot in front of square but top-edged to mid-on. Bavuma was on 27 off 66 balls at the time and he upped the ante, scoring his next 23 runs off 38 balls including two cover drives and a top-edge off Taskin that went between first and second slip for four, to bring up 50 off 104 balls.

With Verreynne at the other end, Bavuma took South Africa to the close, 47 runs away from a much-anticipated, much-talked-about second Test century after scoring his first more than six years ago, in 2016.