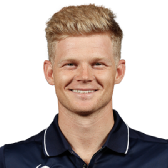 Oval Invincibles' bowlers set up a six-wicket win against Welsh Fire to boost them into third at the halfway mark of the Hundred's group stage as their captain Sam Billings saw them home with seven balls to spare.

Laurie Evans hit David Payne for four, six and six in the space of three balls to take the Invincibles over the line and lift a home crowd of 21,279 off their seats, getting their season back up and running after a washout against London Spirit and a tight defeat to Northern Superchargers in their last two fixtures.

This was a performance that had all the hallmarks of a Tom Moody team, with the overseas spin attack of Sunil Narine and Tabraiz Shamsi - who returned 1 for 41 in 40 balls between them - complemented by a strong core of domestic seamers to reduce the Fire to a below-par 121. An aggressive Powerplay approach put an early dent in the required rate, and despite a squeeze in the middle, Billings and Evans put on an unbroken 52 off 39 balls to see them across the line.

The Invincibles' win lifts them up into third, a point off frontrunners Trent Rockets, and saw them shift the Fire down into fifth. In truth, the table is incredibly tight, with three points separating the Rockets and the seventh-placed Superchargers after four group games each. Only London Spirit appear out of knockout contention.

Invincibles' fast start
Chasing teams have started to make a concerted effort to get ahead of the game in the Powerplay in recent Hundred games, with slowish pitches across the competition meaning that the first 25 balls represent the best time to score runs. The Invincibles chase exemplified that approach, as they lost two wickets in the first five sets but took the required rate down to a run a ball with an ultra-positive strategy.

Jason Roy was caught off a steepler at mid-off as Matt Milnes - such a late injury replacement for Liam Plunkett that there wasn't time for his named to be printed on the back of his shirt - struck with his first ball in the competition, but Will Jacks and Sunil Narine traded boundaries off Milnes and Payne to remove any scoring pressure.

Narine, whose batting remains an undervalued asset four-and-a-half years since he was first used as a pinch-hitter in the Big Bash, was confronted with his weakness - short balls into the body at decent pace - but pulled two sixes over the long square boundaries in his shot-a-minute 19 off 11, his second handy contribution in a row from No. 3.

Jacks, meanwhile, was significantly more orthodox, flicking an effortless 86-metre six over square leg off Jimmy Neesham and punching him through backward point when he over-adjusted, batting with similar attacking intent before falling to the penultimate ball of the Powerplay for a nine-ball 20. Invincibles hit more sixes in their first 22 balls than Fire managed in their whole innings, demonstrating the contrast in the two teams' approaches.

Qais closed
Qais Ahmad came on with the Invincibles needing 73 more off 70 balls with seven wickets in hand, tasked with finding further breakthroughs while pushing the required rate up. He bowled two sets of 10 on the bounce and returned figures of 1 for 12, giving Colin Ingram a particularly torrid time by drawing him forward and using his variations to beat him on both the inside and outside edge.

Ingram managed only five runs from the 10 balls he faced from Qais. He was given out from the first, only to successfully review the lbw decision, and just about survived the second by sliding his back foot into the crease moments before Tom Banton whipped the bails off. He eventually fell lbw while trying to sweep, but Billings managed to see off the rest of his spell to keep Invincibles in control.

Duckett's lone hand
Ben Duckett, captaining Fire in Jonny Bairstow's absence on Test duty, became the leading run-scorer in the Hundred before he was dismissed off the final ball of the innings for 65 off 52, and has passed 30 in each of his four knocks so far. He looked in sublime touch, timing two compact punches through midwicket across the vast outfield for four in the Powerplay, and was the only batter to look comfortable against spin - nobody else managed to hit Narine for four.

He struggled to get on strike as his innings wore on, facing only eight balls in the five sets of five between the 66th and 90th deliveries. That was in part due to the Hundred's new regulations, with 10 balls in a row from the same end meaning a batter can only be stranded at the non-striker's end, and in part due to a lack of support from the middle order. Matt Critchley, who made 3 off 12 painful balls, was particularly culpable.

By the time Duckett finally got back on strike for the penultimate set of five, he looked bereft of confidence and rhythm, to the extent that he took two from the four balls he faced from Tom Curran. It was enough for Billings to have a late change of heart, leaving Curran on for the final five having initially turned to Reece Topley, but it proved to be a mistake: Curran struggled for consistency, and the Fire added 16 off the last five balls as Duckett swung through the leg side. In the end, it did not prove costly.