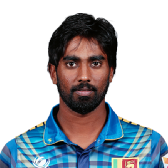 Two teams, both doing a lot of things wrong. In the end, Sri Lanka did just about enough right and got on the points table with a 34-run (DLS method) win, preventing Afghanistan from recording their first World Cup win over a full-member nation. In the process, they also ensured that Lasith Malinga finally figured in an ODI win after July 6, 2017 - he had been part of 21 losses and one no-result in between.

For Afghanistan, the day started well with the right call on the coin, but Hamid Hassan missed his lines and lengths completely upfront to concede 31 runs in his first two overs. Dawlat Zadran was better only in comparison and the ground fielding even worse than what Hassan dished out. If Afghanistan were in the contest despite all that, it was only due to one man: Mohammad Nabi. Nabi's four wickets - including three in a chaotic over - put Sri Lanka in a hole they never quite got out of but rain and a revised target later, a batting effort even poorer than the Sri Lankans' meant Afghanistan finished second best.

But, chasing 187 in 41 overs after Sri Lanka were bowled out for 201 in 32.4, Afghanistan met with their old frailties: lack of patience, an obsession with big shots, and a failure to bat in phases. Hazratullah Zazai looked good - in his smash-everything way - early on, but despite a let-off when he skied Malinga only for Kusal Mendis to drop a sitter at deep square leg, he only managed 30 off 25 before Nuwan Pradeep had his number. Though it really was Thisara Perera's wicket, as he followed Zazai's mistimed hook and threw in the dive to grab the dipping ball at fine leg.

That made it 44 for 3 - Mohammad Shahzad and Rahmat Shah had been dismissed earlier - and 57 for 5 was only around the corner, but amid a drizzle that didn't really go away but never really threatened to push the players off the field either, Gulbadin Naib and Najibullah Zadran scripted a remarkable recovery.

The pair, up against a bowling attack with more experience and nous than them, fought hard, played their shots but without much risk, and added 64 runs for the sixth wicket. A straight drive from Naib off Malinga was especially pleasing to the eye, though when they threw their bats, they mostly went aerial.

But once Thisara got a gentle cutter to nip in big time to hit Naib's off stump, the wheels came off the chase. Najibullah tried, farming the strike in the company of the tail-enders, and kept Afghanistan in the fight. who knows what might have been had he a partner he could depend on. As it turned out, he went for a run that wasn't and could only trot off once Dimuth Karunaratne knocked the stumps down at the non-striker's end. That, really, was the end of it. Malinga applied the finishing touches with two yorkers that took out the stumps, but Pradeep was the star of the bowling effort, his pace and the steep bounce he generated netting him 4 for 31, his career-best figures, and the Man-of-the-Match award.

In the first innings, it was all about Nabi. Four times in five balls he looked like he had a wicket. Three of those times, he actually did. Sri Lanka, who started their 22nd over on 144 for 1, were suddenly 146 for 4 at the end of it. Nabi's ploy was to go slow, slower, and slowest, and it worked like a charm on a grippy surface.

Lahiru Thirimanne was the first of those three, waiting for Nabi's flighted delivery on off stump to arrive, then pushing at the ball and under-edging on to the stumps. Next ball, Nabi had new man Kusal Mendis edging, but just past Rahmat at slip; the very next ball, it went to hand. A ball later, this time Angelo Mathews, nicked off to Rahmat off Shahzad's pads. Just like that, Sri Lanka's projected score on ESPNcricinfo's forecaster dipped from 333 to 217.

It had started beautifully for Sri Lanka after they were put in. In overcast conditions, Hassan conceded 15 and 16 runs in his first two overs, and Sri Lanka were on their way till Nabi and Naib got together to stem the flow of runs.

By the end of the tenth over, though, Sri Lanka were cruising, the 136-run rollover against New Zealand forgotten.

True, Karunaratne was crawling, after carrying his bat through the collapse the other day, but Kusal Perera, opening instead of Thirimanne, was in fine fettle, chugging along in style. They put on 92 for the first wicket - the highest partnership in the game. Afghanistan's fielding, average at the best of times, was fraying at the edges at that stage, and it was all Sri Lanka. The tide had to turn, and it did, and it was courtesy Nabi, who struck first ball of the 14th over. Karunaratne stepped out, swung, but never got any sort of connection to a 'slower', going only as far as Najibullah at long leg.

Then came the three-wicket burst, and the meltdown was on. Hassan, after that awful two-over spell, came back and hit a beautiful length and aimed fourth stump. Dhananjaya de Silva succumbed, hanging his bat out and bringing Shahzad into business.

Udana's straight six off Nabi was really just an aberration as the wickets continued to fall. When Kusal nicked a reverse-sweep off Rashid Khan for 78, Sri Lanka were 180 for 8.

That's when the rain came down, kept everyone out for almost three hours, and when the game restarted, lasted four more overs and, courtesy Suranga Lakmal's biggies off Dawlat, Sri Lanka got past 200. It was enough in the end.