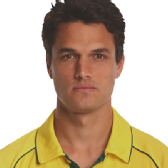 Well, if there is ever a good news for Royals coming out, then it is that they are still alive, but just about. They need to beat Knight Riders by around 120 runs though, which sounds unrealistic. Anyway, Mumbai are up to fifth in the table - below Knight Riders on NRR - as the contest heats up for the final playoffs spot. But don't forget to catch us tomorrow as the round-robin stage nears it end. Goodnight and goodbye until then!

Nathan Coulter-Nile is the Player of the Match: "Just trying to keep simple. It was a hard wicket to bat on. I'm not fussed about when I come to bowl."

Rohit on Mumbai's win: "We had to come here and do what we had to do, which was to get the two points... It was a chance to improve our run rate as well. We got off to a flier, and we said there is a chance for us to up the run rate. It was the perfect game for us to do that. Kishan is playing after a couple of games, so we wanted him to take his time. I didn't say anything to him [after he played a maiden]. All we wanted for him was to play his shots, which is what he did... When you are under the radar, it is important to do your job. We have been doing well and preparing well. All the bowlers came together and used the conditions well. [Playing Sunrisers last?] All eight teams are capable of beating each other. But the good thing is that KKR play before us, so we know what to do."

Time for the presentations

Rupesh: "Interesting contest for MoM -- Will it be Kishan or NCN!" --- I would go with Coulter-Nile as he set it up for Mumbai.

Amit: "Oh Mumbai! Could you not have done this one game earlier? Their fortunes now depend on the team they comprehensively beat today. "

Kishan after his fifty: "Obviously it's nice to be back opening and getting the runs. It is a very nice feeling. We fielded first and got a good idea of the wicket... We also knew that the ball wasn't coming that well. The plan was simple to play in the V. Ups and downs are a big part of sportsmen's [lives]. I had a chat with Virat bhai and Hardik bhai, and also KP [Pollard]. That gave me confidence. What we have to do is be prepared for the next match, and play with the same energy as today."

VijayR: "Ishan kishan has played 10 dot balls. Ideally it's a 15 ball fifty for him ! Something MI would cheer about !"

Here's Samson speaking after the loss: "It was a challenging wicket to bat on, and coming to play in Sharjah was tough. Abu Dhabi was one of the best wickets we played on for batting. It's a bit tough and cloudy in the mind right now. But definitely we will like to play better cricket from the next game. The pitch was a bit better in the second innings."

8.48pm Comprehensive win for Mumbai with eight wickets and more than 11 overs in hand. Mumbai - so also India - will be pleased with Kishan's return to form, as he dominated with an unbeaten 25-ball fifty, which included five fours and three sixes. A tough night for Royals after a massive win against Super Kings the other day.

8.2
6
Mustafizur Rahman to Ishan Kishan, SIX, and wraps it up with a six! That's his fifty too. Mumbai's second largest win in IPL with balls to spare. Kishan into the runs, and Mumbai still alive. Short of a length ball on off, and he makes room to slam that pull for six beyond the deep midwicket fence
8.1
4
Mustafizur Rahman to Ishan Kishan, FOUR, full-toss outside off, and Kishan lunges into it to loft that to deep extra cover! Beats deep point to his left as he leans into that uppish drive

Good chance for Mumbai to finish it off in this over.

7.4
3nb
Sakariya to Ishan Kishan, (no ball) 2 runs, takes a step across off, and hangs back deep in his crease to hoick that very full ball on off to deep square leg. This is a no-ball too