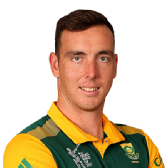 4.20pm Rossouw raises his bat, the crowd laps him up. Faf claps the batsmen off. SA rested as many as three first-choice bowlers, but still wiped out Australia for 167 inside 37 overs. Abbott led the way with the new ball, Shamsi with the older one. Stand-in captain Faf then anchored the modest chase with his second fifty-plus score of the series. The hosts are now set for a whitewash of Australia. Can they become the first team to sweep Australia in a five-ODI series?

Steven Smith, Australia captain: We wanted a complete performance - both with bat and ball - today, it din't start well. When you score 167, you din't win many games. Maybe this wicket wasn't good as other ones. 250 may have been a good total. 167, not too much for the bowlers. We started to look better with the ball, good areas and tighter lines. Still plenty for us to play for in Cape Town. Don't want to be whitewashed. It would be nice to end the tour on a good note.

Faf du Plessis, South Africa captain: [4-0] sounds amazing. If we get Australia under pressure, we really should hammer down. Abbott was outstanding with the new ball and Shamsi spun a web around them. Imran is still there. It gives us a great combination. Phangi bowled really well today. The wicket din't spin much, he still bowled in the good areas. It was a really tough one-day wicket. Two-paced and the ball sometimes stood up, so cross-bat shots were hard. Australia are a fantastic one-day team, and we have to give credit to ourselves. We'll enjoy tonight, and then get back to the practice. 5-0 is on the cards.

Abbott gets a game and is the Man of the Match: Nice to get a run, and make an impact. Tough sitting on the sidelines. I said to a few guys in the morning that I felt nervous. It is all about keeping fit and training hard. When you get the opportunity, hope it comes out okay. Nice to get big wickets on the day with the new ball. We know how destructive those guys [Warner and Finch] can be. The conditions were tough and we embraced it.

Thanks for your company and comments. Keep sending them in. Do come back for the final ODI. Until then, this is Deiva signing off on the behalf of Nikhil and Raghav.

35.3
4
Zampa to Rossouw, FOUR runs, South Africa soar to 4-0. The birthday boys - Rossouw and FB - finish it off. Rossouw soars down the track, drills it against the turn through the covers
35.2
0
Zampa to Rossouw, no run, slides on outside off, punched to extra-cover

35.1
1
Zampa to Behardien, 1 run, low full toss on off, patted down to mid-on for a hurried single. The fielder splatters the stumps at the non-striker's end, but FB is well in. He clutches his hamstring