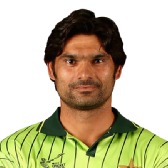 And that is all from our coverage of the first game. Andre Russell has won the toss for Tallawahs and left Pollard's jaw on the floor by electing to bat against the Stars in the second game. Head over there! Have a good night.

Irfan: I thank god first of all. I'm happy. Would have been happier if the team had won because of my spell. It was a good, lively pitch to bowl on. It was especially helpful with my natural bounce.

Mohammed Irfan is the Man of the Match.

Dave Bull: "If it seems too strange to be true it is 1) Cricket 2) Not cricket"

AlistairDiamond: "What was that all about? the Tridents were more in charge of this game than any team has ever been - then they flung it away crazily! "

Vivek: "This might be the strangest game of cricket I've ever seen ..."

7:18pm Tridents pulled off an unlikely win against Tallawahs in Florida a couple of days back. Today they've pulled off what pretty much the opposite. Or so they'll think anyway. 10.63 is never too much to get in a T20, but after having the Patriots 31 for 2 in nine overs, they won't be happy with how easily this has ended. With seven balls to spare. Brandon King the hero, after briefly looking like the villain. How he turned his innings around, having swung across the line with no shape for the first 30 or so balls. Md. Irfan might have felt he's bowling to himself as King swatted about. 23 dot balls from the big man, and the most economical spell in the history of this format. How he would've liked that to be the winning contribution. But it turned around with a 27-run Steve Smith over, followed by a 22-run Reifer over. Holder then went for 12 and Patriots had tripled their score in three overs the ninth. Suddenly, they only needed 55 and despite losing both King and Thomas, it was an easy finish in the end. They're now top of the table.

18.5
1
Wahab Riaz to Cutting, 1 run, low full toss on leg stump, flicked to deep midwicket's right and that's the win! Cutting thinks they need two and has done two half-laps of the pitch, but he's delivered the winning runs
18.4
0
Wahab Riaz to Cutting, no run, falls over and takes a tumble as he looks to ramp this short ball fine. Short ball rising above the stumps, he's jumped into the off side but hasn't made contact
18.3
1
Wahab Riaz to Cooper, 1 run, low full toss outside off, slices to third man
18.2
2
Wahab Riaz to Cooper, 2 runs, bouncer down leg side. Gets in position too quickly for the hook. This stops on him though and he gloves it. Lobs wide of the keeper and Irfan is picking this up at fine leg, probably wondering how it's gotten here
18.1
2
Wahab Riaz to Cooper, 2 runs, leading edge lands short of long-on. Low full toss hooping away towards off stump and he closes the face too early

17.6
4
Nurse to Cutting, FOUR runs, superb batting. Cutting using his experience to leave as few as possible before Wahab comes back on. This is tossed up at a good length, he allows it to come on and slaps it straight again. This time it goes over the boundary on the bounce