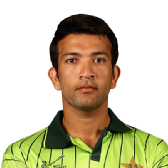 Given how unlikely it looked at various stages over the last few months, just to be at this stage now, the final of the sixth season of the PSL between the Multan Sultans and the Peshawar Zalmi, is a bit of a triumph.

Not only did a resumption of the season look a distant prospect in the days right after it was disrupted, even until the final few days before the resumption there were moments when it was off one minute, on the next. It could have moved to Dubai and Sharjah; there was prolonged confusion over when - and even which - players could get into Abu Dhabi; there was concern over arrivals on different dates from different countries impacting quarantine periods; at one stage, with the prospect of production crews not being allowed from India and South Africa, the whole thing could have been off.

There wasn't a definite start and end date until June 3 when the PCB released a schedule announcing June 9 as the start. Limited player-availability and the fact that this would be played in peak summer in what is, essentially, a hyper-developed desert seemed the least of it. As an exercise in logistics, only the organising of a Pakistani wedding could ever have given organisers headaches like this.

So, in the short but already tumultuous history of the PSL, it matters less who wins on Thursday evening than that it is happening at all. Except, of course, this is not how sportsmen think. They don't much care for the improbability of an occasion happening as much as making that occasion theirs.

The Sultans have been the most successful team in this Abu Dhabi leg, winning five of six games. Mohammad Rizwan's leadership has done nothing to dampen the curiosity of that minority which wonders whether he should be Pakistan captain; a rivalry-that-isn't with Babar Azam enhanced by the two opening together for Pakistan and being one and two on the run charts this season.

And though Rizwan hasn't been as prolific in this leg as he was in Karachi, he's been able to fall back on the unlikely resurgence of Sohaib Maqsood, now available in fetching power-hitting colours. Maqsood is third top-scorer this season, but more (ahem!) striking is the strike rate of 152.52, behind only Colin Munro among the top-ten run-scorers.

Otherwise, in the field, and everywhere, has been Shahnawaz Dahani, currently the most vibing cricketer on earth. His primary superpower is enough good vibes to end all hate, but handily he's a quick learner who bowls mean, hard lengths at 140kph-plus.

By contrast, the Zalmi are not as well-oiled - no coding system for bowlers here - and their form in Abu Dhabi has wavered more. No one man stands out for them either, though honourable mentions for Sherfane Rutherford and the endurance of Shoaib Malik. The latter is now in his fourth decade of top-level cricket and, given circumstances and history, only a fool would rule out an umpteenth Pakistan comeback.

Hazratullah Zazai has turbo-boosted their starts by such a magnitude that they have managed to bring Imam-ul-Haq into the XI instead of Haider Ali. Ordinarily, that would go against T20 thinking, yet here somehow it hasn't mattered. Neither has it that Mohammad Irfan is now 39. He is ageing, but it's not like he's getting shorter so all those challenges for a batter remain.

The unmistakable sense is that the whole has worked better than its parts which, if you think about it, is entirely appropriate for a side led by Wahab Riaz. The totality of Riaz, the athleticism, the hitting, the pace, the effort, has always been worth more than any individual attribute. He's still taking wickets (only Dahani has more this season), still pulling off the occasional stunning catch, and still swinging his bat every bit as hard as a strike rate of 188.57 suggests. For all the new stars the PSL has come to be identified with over six seasons, it is still Riaz who represents something of the beating heart of it.

As unlikely as Maqsood but lesser noted has been Imran Khan's impact for the Sultans. He's rarely been thought of as a bowler for the format - he'd only played one game in the PSL before this season. But, in very Umar Gul ways, he's become their joint-second highest wicket-taker.

How's this for impact? Jonathan Wells came out of quarantine on June 20, he had a special net session on Tuesday and then turned up for his first game for the Zalmi in the evening. He was overshadowed by Zazai but his unbeaten 55 was every bit as crucial in calming nerves in the chase.

A wild guess: it will be hot.

Abu Dhabi's pitches, on the other hand, have not been so predictable and a bit of everything has been on display during the last fortnight. Some new-ball swing, turn, reverse, 200+ totals, sub-100 totals; unlike the Karachi leg it isn't so easy to win the toss and chase.

Mohammad Irfan, whose leg injury sparked a bit of controversy in the win over the Islamabad United, is better and likely to play.

"We have played so well and we have played as a team. The best thing from the first leg was that throughout we never blamed anyone for a mistake. This is a team where every individual has a very important role, in the XI or the ones sitting outside. Our morale and momentum is high."

"We looked like a team that would be eliminated, but we really stuck together. People will single certain people out but I'd like to praise the guys as a group. We didn't quite play as badly in Karachi, and lost a few tight games, but we have executed our plans perfectly here."