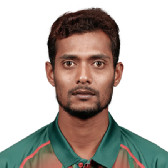 Batting first at Shere Bangla National Stadium, Rupganj made 314 for 5 in 50 overs with Pappu smashing eight sixes and 12 fours in his 95-ball 125. He added 150 runs in 22.3 overs for the second wicket stand with Mohammad Naim, who made 45 himself. The captain Naeem Islam also chipped in with an unbeaten on 61 off 53 balls.

Kalabagan got off to a fast start with Shreevats Goswami and Tasamul Haque adding 65 runs for the opening stand. Goswami (75) and Mohammad Ashraful (64) followed that up with another half-century stand once that was broken, the middle order couldn't keep pace with the asking rate. Spinners Parvez Rasool and Asif Hasan took three wickets each while seamer Mohammad Shahid took two.

Chasing 290 to win, Azmir and Salman added 88 runs for the second wicket before Salman and Dhiman Ghosh contributed 50 for the third wicket. While all of that set up the chase, it was finished by Dhawan and Javed, who batted at better than run-a-ball to ensure their team secured victory.

Earlier in the day, Mizanur Rahman and Junaid Siddique recorded only the third 200-plus opening partnership in Bangladesh List A history. Mizanur made 102 off 120 balls with nine fours and three sixes. Junaid missed out on the century, making 92 off 103 balls with eight fours and a six. Shafiul Islam was the pick of Agrani's bowlers, finishing with 4 for 48.