Is a user of performance-enhancing drugs a cheater, an opportunist or simply a realist in today's sports world? That's a long-standing debate, and it appears to have no end in sight. Regardless where you stand on the issue, though, it is no longer debatable that performance-enhancing drugs touch nearly every sport we watch and care about. And perhaps the most recognizable face of the "juiced" era belongs to Jose Canseco, the former big league slugger who has forged a second career by going public with charges of widespread steroid use in major league baseball. To the chagrin of his brethren in the game, he has named names. More often than not as the steroids story has unfolded, Canseco's allegations have proved accurate.

In his tell-all book, "Juiced: Wild Times, Rampant 'Roids, Smash Hits & How Baseball Got Big," Canseco confessed to using illegal steroids and human growth hormone from his first big league season to his last in 2001. This spring, Canseco's name surfaced among several athletes caught up as customers in a government crackdown on Internet sales of performance-enhancing drugs.

True to form, he admitted that he purchased drugs online through Applied Pharmacy Services. The two owners of the company based in Mobile, Ala., have been indicted by an Albany, N.Y., grand jury. Canseco recently shared with ESPN.com his firsthand experiences buying drugs online.

ESPN.com: Are reports accurate in saying that you purchase drugs through Applied Pharmacy?

CANSECO: I'm sure I have. Absolutely. And I think they make you go through a process, through a doctor and prescription and all that, sure  They have a Web site, and you basically contact a doctor and they prescribe whatever anti-aging products  from what I know, they are an anti-aging type clinic.

ESPN.com: Was it a legitimate prescription? 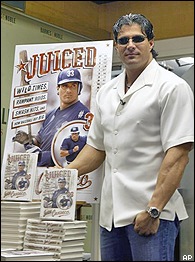 CANSECO: Yeah, definitely. It sure was.

ESPN.com: Was it your personal doctor?

CANSECO: No, it is their doctor that they prescribe to you.

ESPN.com: So they give you a doctor's name, and he writes a prescription?

ESPN.com: That is done online?

CANSECO: No, you do it over the phone. You make the contact online and then they connect you on the phone, and you go through this whole information-type deal and speak to the doctor.

ESPN.com: But you never met the doctor?

ESPN.com: Does the doctor ask why you need the stuff?

CANSECO: Oh yeah, there is a huge questionnaire you have to fill out  It is huge, maybe 100 questions. It is very thorough.

ESPN.com: What product did you get from them?

ESPN.com: Why did you need that?

ESPN.com: So once you use testosterone, you tend to have low levels later if you don't keep using?

CANSECO: Right. You just try to bring your levels back to normal, really.

ESPN.com: How long have you been using testosterone?

CANSECO: Oh god, since I was playing baseball, I was using it. It is no secret
.

ESPN.com: Sounds like you may have to use it the rest of your life?

CANSECO: I don't know. You check your levels now and then, and if your levels are lower than average, yeah, obviously. Or if you're feeling a little weak or have muscle atrophy, you can't sleep at night -- definitely.

ESPN.com: Where do you get your levels checked? Or how do you have it done?

ESPN.com: In your case, what were the symptoms or issues?

CANSECO: Oh god, people don't know this, but I have had six major surgeries. So it would be like joint pain. It could be atrophy of muscle. It could be weakness, sleeplessness. It could be a combination of everything.

ESPN.com: What anti-aging clinic do you use?

CANSECO: That [Applied Pharmacy] is the one I was using. I used them once or twice. They supply you with supplement or whatever you need -- like four months, six months, eight months, whatever you need.

ESPN.com: Did a lot of athletes know about Applied?

CANSECO: I don't know. I can only speak for myself. I can't speak for them.

ESPN.com: So nobody suggested it; you just found it on your own?

CANSECO: Lot of times. They have pop-ups that come on the computer screen. That is how they advertise. I think it was a pop-up or something.

ESPN.com: Have you dealt with other anti-aging clinics?

CANSECO: That is the only one I dealt with. I have talked to other ones just in case I need to replenish. There are a million here in L.A. that you can just walk into, really. I'm thinking about doing that.

ESPN.com: Have you done that, too?

CANSECO: No, but I am going to. Definitely.

ESPN.com: How do you find which one to go to?