With all the votes in and counted, EA Sports has revealed the 11 global superstars who make up the FIFA 22 Team of the Year.

It all began with an 80-player shortlist that was announced earlier this month and featured the very best talent that the top European leagues have to offer. The vote was then opened to fans across the world, who were able to select their own Ultimate XI.

The ballot has been concluded, the results are in and the FIFA 22 TOTY has been finalised, with each player included receiving special stat boosts and performance-enhancing items in-game to reflect their achievement.

Jump to: Notable Absentees | FIFA 22 Team of the Year | Comparison with other XIs

There are plenty of big names who did not make the cut. Forwards like Manchester United's Cristiano Ronaldo, Liverpool's Mohamed Salah and Paris Saint-Germain's Neymar all miss out, while there is also no place for elite striker like Real Madrid's Karim Benzema or Borussia Dortmund's Erling Haaland.

The midfield in the Team of the Year is lacking Bayern Munich's Joshua Kimmich, Real Madrid's Luka Modric and Paris Saint-Germain's Marco Verratti, despite them all winning their domestic league titles in 2020 and the latter also triumphing at the European Championship.

Virgil van Dijk is not among the defensive ranks after seeing the majority of his year disrupted by injury, but his Liverpool teammate Trent Alexander-Arnold's omission is a much bigger surprise. Juventus and Italy duo Giorgio Chiellini and Leonardo Bonucci are also absent despite forming the bedrock of the Azzurri's Euro 2020 winning team.

And with only one goalkeeping place up for grabs, many of the best world's best shot-stoppers in the world -- such as Liverpool's Alisson, Manchester City's Ederson and Atletico Madrid's Jan Oblak -- all find themselves ousted.

When it comes to the FIFA 22 TOTY, which was revealed by David Beckham, the final XI is entirely populated by players from just four clubs. In fact, 10 of the players in the TOTY hail from just three clubs in Manchester City, Chelsea and Paris Saint-Germain -- three of the biggest and wealthiest sides on the planet. Here is the FIFA 22 Team of the Year in full:

🏆 Football's best, decided by you.
This is your #TOTY. pic.twitter.com/eyK03VbFgh

He won't turn 23 for another month, but Donnarumma has already made 224 league appearances in his career since making his debut for AC Milan in 2015 -- more than any other player in any position born in 1999 or later. It's highly likely that the Italian No. 1 will go on to break a number of records as his burgeoning career progresses, both at club and international level. Donnarumma was key in Italy's run to glory at Euro 2020 last summer, after which he became the first-ever goalkeeper to be named UEFA Player of the Tournament since the award was first introduced in 1996.

Extremely versatile and equally adept in attack as in defence, flying wing-back Hakimi took 151 touches in the opposition box in league games in 2021, more than any other defender in Europe's top five divisions. The Morocco international also scored six goals and provided eight assists in 51 appearances for PSG and former club Inter Milan in that time, finding himself on the winning side in 30 league games -- an impressive total only bettered by Ruben Dias of Manchester City (32).

Marquinhos successfully completed more passes (2,901 from 3,131 attempted in all competitions) than any other PSG player in 2021. In purely defensive terms, the refined Brazilian centre-back helped his club keep 16 cleans sheets in 44 games and was only dribbled past on 12 occasions, while at the other end he scored more headers (4) in Ligue 1 than any other player.

An ultra-reliable presence in the heart of City's back four, Dias proved instrumental in 2021 as Pep Guardiola's side kept 22 clean sheets in the 58 games he played. With 32 victories in 39 appearances, Dias also finished on the winning side more often in league games than any other defender in Europe's top divisions. He ended the year as the City player with the most aerial duel wins (64), headed clearances (50) and blocked shots (26) as well as the second best Premier League passing accuracy stat (93.3%), second only to defensive cohort Aymeric Laporte (93.9%).

Dias' fellow Portugal international Cancelo scored five goals and laid on 11 assists in 53 games for City in 2021, vastly improving his year-on-year goal involvement tally from the measly three (one goal and two assists) he managed in 2020. No full-back in Europe's top five leagues completed more passes (2,403) than Cancelo in the same time frame, with 21 cleans sheets, 80 interceptions and 115 tackles thrown in for good measure.

For the sixth straight year, ESPN presents its annual ranking of the best men's players and coaches! A collection of Top 10s features No. 1s from six clubs, with 41 new entries and 28 nationalities. Read

Underlining his importance to the team, Kante won 72 tackles in 41 games for Chelsea over the course of 2021, and he made more average interceptions per 90 minutes (1.8) than any other player at the club to have amassed more than 2,000 total minutes on the pitch. Kante carried his form into Euro 2020, where he amassed more interceptions per 90 minutes (3.2) than any other player to have played at least 300 minutes at the tournament. The France international is also remarkable for the consistency with which he hits top form: he recovered possession 13 times during his man-of-the-match performance against Atletico Madrid in the Champions League in March 2021, equaling the record he previously set against Barcelona in February 2018.

With 13 goals in 50 appearances overall for Chelsea, Jorginho scored 10 times in the Premier League in 2021 (all from the penalty spot) to muster the best league goal return of his career. He also starred in a deep-lying midfield role for Italy as they powered to glory at Euro 2020, making more interceptions than any other player ever during a single European Championship tournament -- 25 in seven games. Jorginho finished third in the Ballon d'Or ranking to cap off a fantastic year for the Blues star.

A mainstay in the FIFA TOTY for the past five years, De Bruyne maintained his ridiculous levels of creativity by creating more chances on average (3.7 per 90 minutes) and scoring more goals from outside the penalty area (5) than any other Premier League player in 2021. The brilliant Belgian was in fine form again last year, scoring 14 goals and providing nine assists in 44 games for City in all competitions. Indeed, he averaged a goal every 192 minutes in the Premier League, a vast improvement from 2020, when he was finding the net once every 292 minutes.

Despite winning a record-extending seventh Ballon d'Or, 2021 was hardly a classic year for Messi at club level with 35 goals in 45 appearances, though that was a definite improvement on 2020 when he scored "just" 26 in 44 and missed out on a place in the FIFA 21 TOTY as a result. He did still somehow manage to end the calendar year as Barcelona's top scorer in all competitions (by 13 clear goals) despite leaving to join Paris Saint-Germain in August. The real pinnacle came at international level where Messi played an inspirational role in securing Argentina's first major title since the 1990s with victory at the 2021 Copa America last summer, where he was crowned Player of the Tournament for the second time in his career.

Recently voted The Best FIFA Men's Player for the second year running, Lewandowski scored more league goals (43) than any other player across Europe's top five leagues in 2021. The evergreen Polish striker scored 58 goals in 47 games in all competitions for Bayern, averaging one goal every 69 minutes he spent on the pitch. He also finished the 2020-21 campaign by breaking through the 40-goal barrier for the sixth consecutive season.

Mbappe, who turned 23 last month, has cemented his reputation as one of the most formidable strikers in world football with 11 major club honours and a World Cup winner's medal already stashed away. With 43 goals in just 53 games in 2021, the prodigious PSG superstar was also able to add "youngest player in Ligue 1 history to score 100 goals" and "youngest player ever to score 100 goals for a single club" to his envious CV. 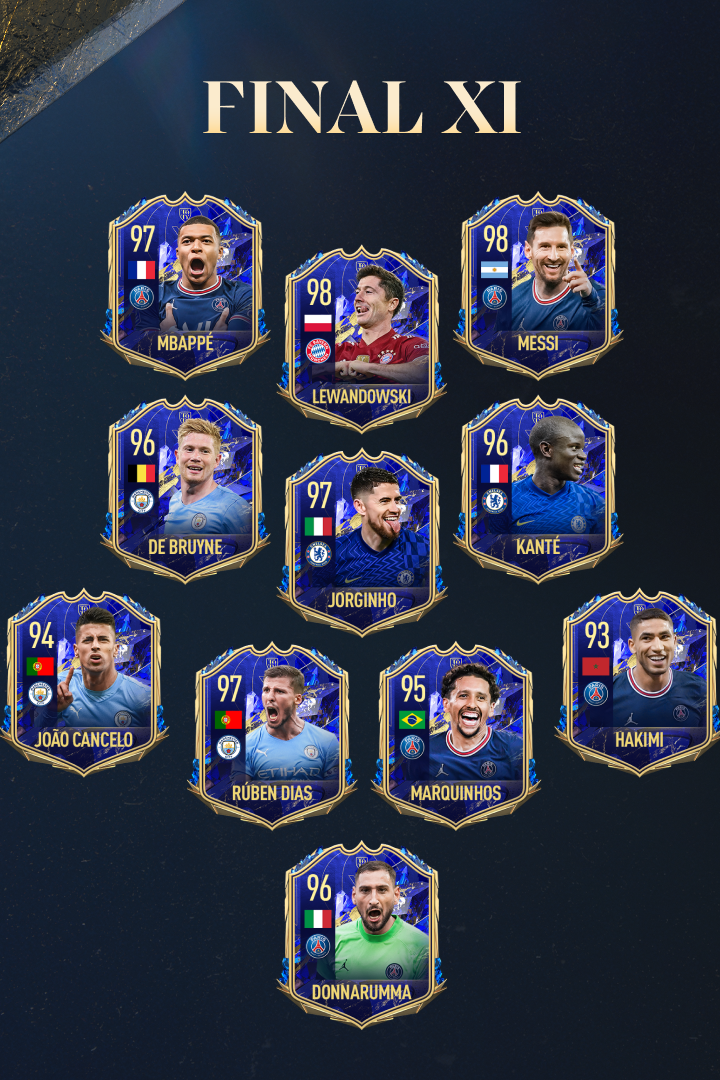 COMPARISON WITH OTHER XIS

There are plenty of parallels between the FIFA 22 TOTY and the FIFA FIFPro World XI that was revealed at the The Best FIFA Awards earlier this week.

Seven players -- Donnarumma, Dias, De Bruyne, Jorginho, Kante, Lewandowski and Messi -- made it into both selections. Where the teams differ is the inclusion of Real Madrid utility man David Alaba and Italy stalwart Bonucci in the FIFPro World 11 defence, as well as Ronaldo and Haaland filling out a rather top-heavy 3-3-4 formation.

By the players, for the players. @FIFAWorldCup pic.twitter.com/zNAZiTp4S2

Regarding the Ballon d'Or, Messi was presented with his seventh trophy at the France Football gala in early December, but 29 other players were also included in the final poll to find the winner.

If we were to assemble a rough Ballon d'Or Team of the Year from the highest-voted players among the 30 nominees, using the same forward-heavy selection policy as the FIFPro XI, it would look a little something like this:


While fairly similar once again, the result is a much more diverse collection of players from a wider spread of clubs, with Salah and Ronaldo finally receiving the call-up they had been previously denied by being crowbarred into a 3-2-5 formation.

The inclusion of Donnarumma, Kjaer, Bonucci, Chiellini and Jorginho, also hints at a much stronger bias in the Ballon d'Or vote toward players who hit their peak at Euro 2020.

So compared to the other best XIs of 2021, the FIFA 22 Team of the Year is certainly the most balanced and the most likely to fare well in a real match. Which is ironic, considering it has been selected by players of a video game.