Liverpool have become the Golden State Warriors, winning every game they play, breaking a new record with each match, pushing so far ahead of the competition that they're skewing our perception of the other 19 teams in the league. In most other years, Manchester City would be in the midst of a title race, but they're still capable of the kind of controlled, systematic destruction that has bulldozed the Premier League in each of the past two seasons. Just ask Aston Villa or, perhaps, the betting market, which considers Pep Guardiola's team as the favorites to win the Champions League.

But enough words have been (and will be) spilled about these two teams. Guilty as charged. So, for those of you who have had it up to here with gegenpressing and juego de posicion, let's take a look at some of the underappreciated stars from the 2019-20 Premier League season.

We'll take one from each phase of the game. In other words: Who's having a career year but won't come close to winning any silverware?

The best Spanish keeper in the Premier League isn't named David de Gea, and he's certainly not called Kepa Arrizabalaga. No, he's a 33-year-old with peroxide-blonde hair who occasionally only answers to one word: Guaita. In fact, the Crystal Palace man hasn't just been the best Spanish keeper in the league this season; he's been the best keeper, period.

According to TruMedia data, Guaita has prevented more than seven goals so far this year. Based on their expected goals on target model, which takes into account the location of a shot and then where the shot was placed on the goal frame, you'd expect the average keeper to concede 26.08 goals. Guaita has only allowed 19 (in addition to one own goal). This is what that shot-saving profile looks like: green dots are goals, and the larger dots are higher-value xG opportunities: 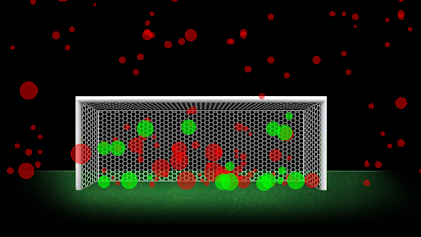 In the 20 games with Guaita in goal, Crystal Palace have allowed one goal per match. In each of the games he missed, they conceded twice. For a team that's scored the joint-fewest goals in the league, Guaita has basically been the difference between a relegation fight and a comfy spot in mid-table.

Think Trent Alexander-Arnold, but the exact opposite. The Liverpool right back has revolutionized the fullback position by saying, "Sure, but what If I were Andrea Pirlo?" Meanwhile, AWB has interpreted the role in his own unique way: "What if I was a defender whose main skill was... defending?"

There are all of TAA's tackles on the season: 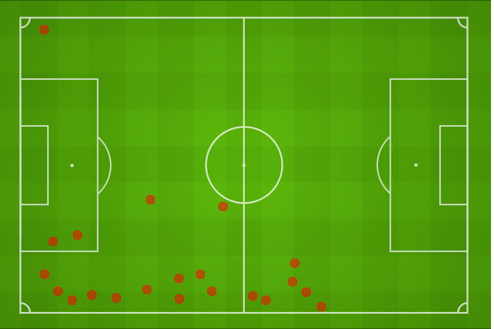 And these are all of AWB's: 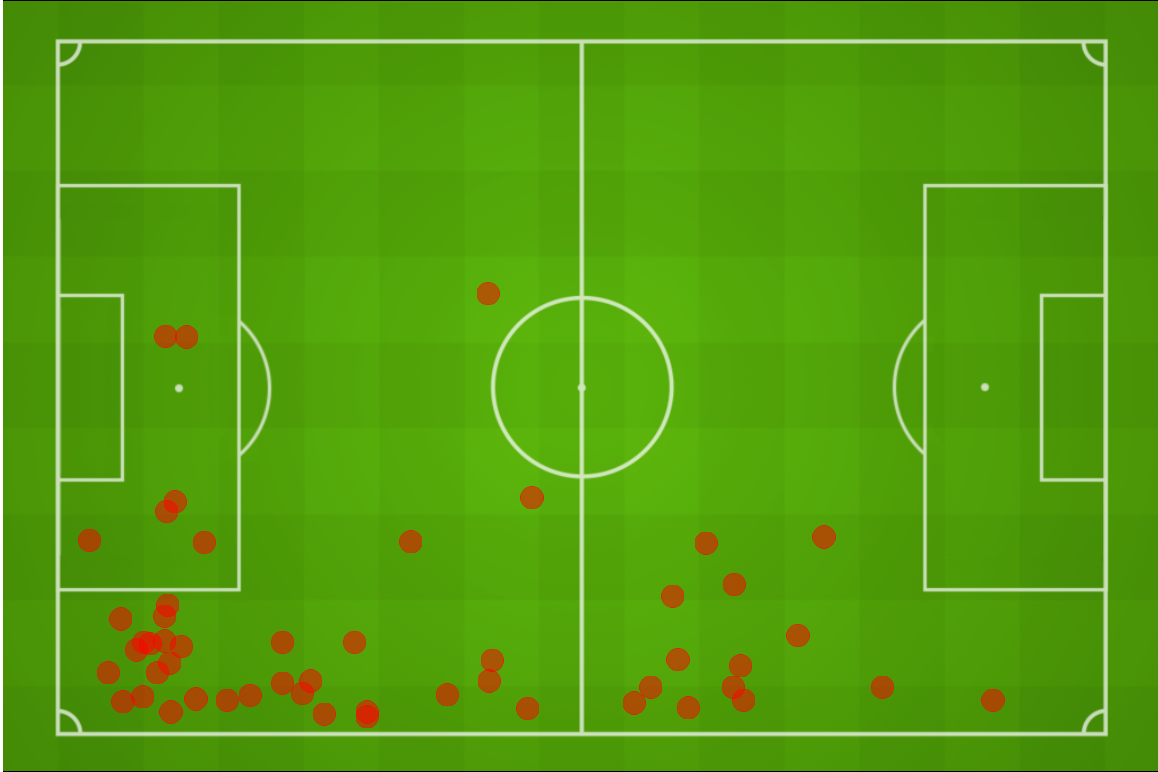 The Manchester United right back is soccer's version of Kawhi Leonard; if you try to dribble the ball in his general vicinity, he's gonna take it from you.

Per the website FBRef, there are 10 players in the Premier League who have faced at least 100 dribbles so far this season. Wan-Bissaka has completed a tackle on 78.3% of the attempts against him. Among those other nine, next best is Leicester's Ricardo Pereira, all the way down at 67.6%. Put another way, the 22-year-old has the 10th-highest tackle rate in the league against opposing dribblers. But no-one above him has faced more than 40 dribbles; Wan-Bissaka has faced 106.

Despite United's uninspiring first 22 games, their defense is actually doing just fine. Per FBRef, they've allowed the fewest expected goals in the league (20.7) and the arrival of Wan-Bissaka over the summer is one of the biggest reasons why.

Want your kid to be a mold-breaking fullback? Better hyphenate his last name.

If you're in the business of predicting the performance of promoted teams, there aren't many better places to look than defense. Per research from the consultancy 21st Club, the teams that tend to stay up are the ones that conceded the fewest goals in the Championship. Although they were the bookmakers' favorites to be relegated right back down, Sheffield United conceded fewer goals than both Norwich and Aston Villa last season. Sure enough, Chris Wilder's team currently sit in sixth place, while the other two promoted sides are both in the relegation places. Only Liverpool have conceded fewer goals.

However, the trademark of Sheffield's season so far is how cohesive they seem to be. The attack and the defense are always connected; remember those overlapping center-backs from earlier in the season? But none of that coherence would be possible without someone to tie it all together.

It's Oliver Norwood's first season in the Premier League, but you wouldn't know it from watching. Per FBRef, only Jorginho has completed more passes (147 to 145) into the final third than the 28-year-old. Alexander-Arnold and Southampton's Pierre-Emile Hojbjerg are the only other players to complete at least 100 passes into the final third and 20 into the penalty area. And Alexander-Arnold and Wolverhampton's Joao Moutinho are the only other players with at least 100 final-third passes and three expected assists. In other words, no-one in the league is more important to every aspect of his team's build-up play than the Northern Irishman. Can you believe he cost less than 2 million to buy from Brighton?

I doubt many people were asking the question "how good can your team be if it's completely built around Oliver Norwood?" at the beginning of the season, but it turns out the answer might be "somewhere in the top six."

If I told you there was a former Real Madrid prospect and Argentine youth international who was rivaling the playmaking of Kevin De Bruyne and David Silva in the Premier League, you'd probably assume that he played for some super-wealthy team or, maybe, you'd try to obtain a copy of James Maddison's birth certificate to see what you were missing. And if I told you that this seemingly hypothetical player was just 23 years old, you'd probably assume that his name was populating every other transfer-rumor roundup, with close-to-nine-figure fees being attached to his name.

Well, this person exists, but he plays for the worst team in the Premier League, and the market doesn't seem to think of him so highly. The crowd-sourced valuations at the website Transfermarkt peg Emi Buendia's value at €18 million, while the transfer algorithm from the CIES football observatory sees it as somewhere between €20-30 million.

Although he might cost less than recent summer signings like Pablo Fornals, Ayoze Perez, or Nicolas Pepe, he's significantly outperformed all of them this season. Really, there aren't many creative midfielders who have been as influential as Buendia.

While Norwich have a better expected-goal differential than Aston Villa, Newcastle, West Ham, and Bournemouth, they're rock-bottom of the table with the worst goal differential and an eight-point gap between themselves and safety. So, although they've been unlucky, they're probably going back down to the Championship. And if they do, Buendia seems likely to move on. He'll be a steal for whoever signs him.

You know what? I'll just come out and say it: Daniel William John Ings -- formerly of Bournemouth and Burnley and Liverpool, now of Southampton -- has been, in his 28th year on this planet, the best goal-scorer in the Premier League.

The best part? Barring injury, Ings's high-level production seems like it should be sustainable since his shot map looks like this: 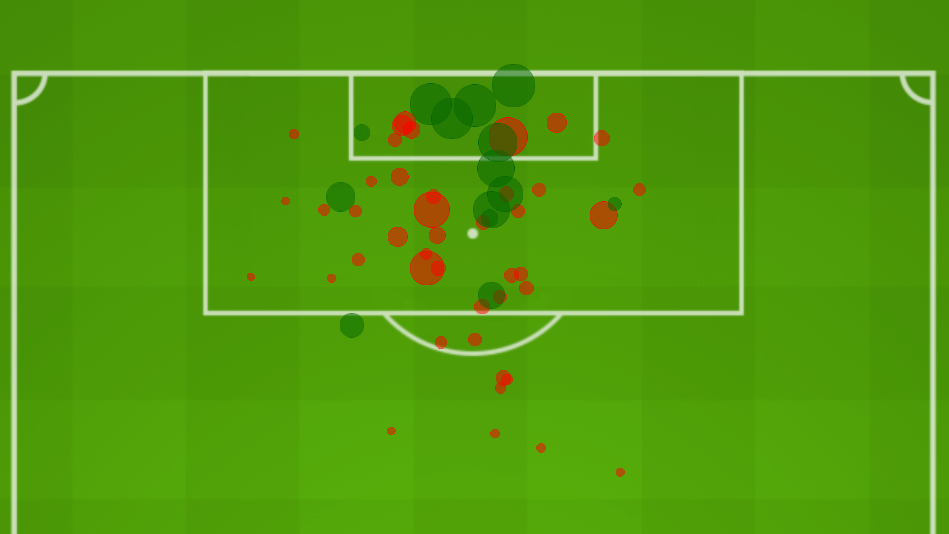 The guy just doesn't take bad shots. Almost everything is within the width of the six-yard box and from no farther out than the penalty spot.

Ings is tied with Jesus atop the league in non-penalty expected goals (10.5), and only Aguero and Jesus are edging him in non-penalty xG per 90. He's taking the eighth-most shots per 90 minutes -- behind Abraham, Raul Jimenez and a bunch of Liverpool and City guys -- and among players who have attempted at least 20 shots, only Vardy and Sadio Mane are averaging a higher xG per shot.