ESPN MMA writers Jeff Wagenheim and Marc Raimondi break down Joanna Jedrzejczyk's impressive victory over Michelle Waterson and what lies ahead for both fighters.

Is the risk worth the reward? Yes, of course it is.

Joanna Jedrzejczyk has the kind of star power that the UFC eternally craves and rarely discovers. She's dynamic as a fighter and no less so as a personality. She reigned for over two and a half years as strawweight champion, making five title defenses in a weight class where all four of the others who've worn the belt -- Carla Esparza, Rose Namajunas, Jessica Andrade and Zhang Weili -- have just one successful defense between them. Even though Jedrzejczyk dropped her title to Namajunas in 2017 and lost to her again in a rematch, there's no one in the 115-pound division -- not even "Thug Rose" -- with a résumé that comes close to matching the 32-year-old Jedrzejczyk's.

Now, after battering Michelle Waterson for five rounds on Saturday, Jedrzejczyk wants the opportunity to fight for her old crown. "Let's go, baby," she said inside the Octagon after the lopsided unanimous decision was announced. "Let's fight for the belt."

Should be a no-brainer, right? 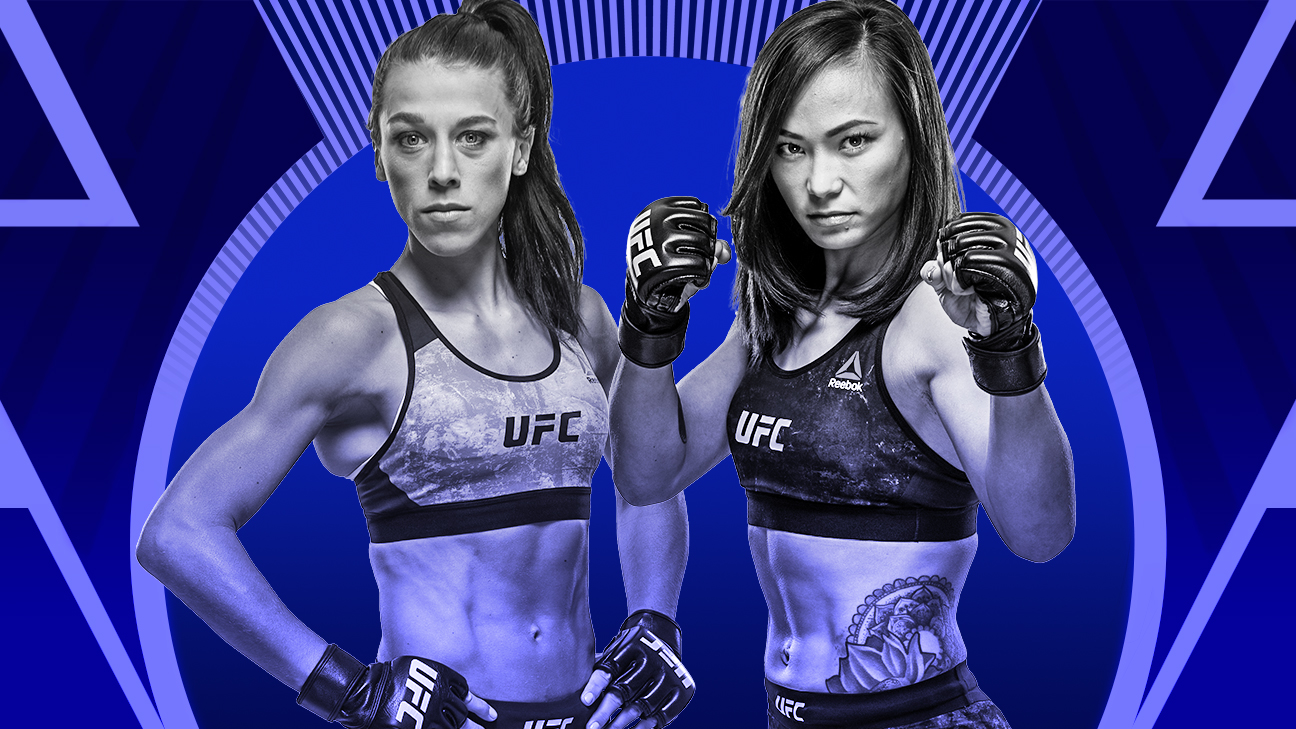 Every fight from UFC Fight Night: Joanna vs. Waterson is available to watch on ESPN+.

Not necessarily. In the lead-up to Saturday's card in Tampa, Florida, Jedrzejczyk was reported to have informed the UFC that she was going to have difficulty making weight. Come Friday, though, she stepped on the scale at 115.5 pounds, a half-pound under the limit for a nontitle strawweight bout. So was the whole scare much ado about nothing?

That's what Dana White would have you believe, calling it "head games." But the concern was real, and it's something the UFC is going to have to contend with again and again for as long as Jedrzejczyk fights in the 115-pound division.

"I'm not a natural strawweight," Jedrzejczyk told ESPN in the lead-up to fight week. "I got to the strawweight division five years ago after I signed with the UFC. It's not natural for me, but I'm doing my best. I always fight two fights. One is before the fight."

If the UFC books Jedrzejczyk as the first challenger for Zhang, the promotion and the fans are going to have to walk on eggshells in the days before weigh-ins, hoping for the best from the woman who wants nothing more than to dust off her old "Joanna Champion" nickname.

Sometimes the calamities that befall title fights are out of the UFC's control. Fighters fall ill. Fighters fail drug tests. Things happen. But this is a situation that the UFC does control. If the matchmakers, knowing what they do about Jedrzejczyk's struggles to make weight, opt to go ahead and put her in a title fight anyway, any fight-week drama involving an athletic commission scale is on them.

But never mind that. Jedrzejczyk is the one. She has blown away every strawweight not named Rose. The cut to 115 clearly is going to be an ongoing challenge for her, but that weight class is her home. Where else is there for her to go? She tried moving up to flyweight last year to challenge Valentina Shevchenko, and that didn't go well for her. Strawweight is her domain -- or at least it was for a long time. Now she wants to reclaim her throne, and although the undefeated Tatiana Suarez can make a case for claiming the next title shot, the strongest case was made on Saturday night -- in the fight and after it.

Michael Bisping breaks down Joanna Jedrzejczyk's win vs. Michelle Waterson and says her future is bright at 115 pounds. For more UFC, sign up here for ESPN+ http://plus.espn.com/ufc.

Jedrzejczyk looked every bit as good against Waterson as she did during her five title defenses. She bloodied Waterson with elbows and punches, stopped all but one insignificant takedown and pounded leg kicks -- even with an injured right foot. Jedrzejczyk's combinations, counters and volume -- 180 significant strikes landed -- were just too much for Waterson.

Coming in, Jedrzejczyk was ranked No. 4 among women's strawweights by ESPN and she is the clear choice to get the title shot against Zhang, who stopped Jessica Andrade to win the belt in August. The only other fighter with a real case to be made for a shot is the undefeated Tatiana Suarez, but she is still recovering from a neck injury and does not expect to be next, Suarez told ESPN. That leaves Jedrzejczyk, who has gone 2-0 at strawweight since losing twice to former champ Rose Namajunas. A bout between Jedrzejczyk, the OG divisional champion, against new blood in Zhang should be extremely compelling -- especially since both excel at striking.

Waterson came into the fight against Jedrzejczyk on a three-fight winning streak. A victory likely would have earned her a title shot and a chance to achieve her dream: being the first UFC champion who is also a mother. Saturday's defeat was a setback, but it doesn't put Waterson completely out of title contention. She is still one of the best strawweight fighters in the world.

A very interesting next matchup for her would be Grasso, who is also coming off a loss, to Carla Esparza last month. At the moment, Waterson is ranked No. 6 and Grasso No. 9 among strawweights by ESPN. It's a bout that makes sense in the divisional hierarchy and it would also tell us a lot about where each woman is at this point in her career. Waterson is 33 years old and has been near the top of the strawweight and atomweight divisions for many years. Grasso, 26, is expected to be a future star at 115 pounds. Something will have to give.