ESPN's panel of Brett Okamoto, Phil Murphy, Marc Raimondi and Jeff Wagenheim breaks down the biggest stories coming out of UFC 255 on Saturday night, including what's next for the headliners and the rise of Joaquin Buckley.

Who should be next: Brandon Moreno

I was fully on board with Cody Garbrandt getting an immediate title shot at Figueiredo before he got injured and was forced to pull out of UFC 255. Garbrandt is a former bantamweight champion. He's coming off a knockout win over Raphael Assuncao. And of course the fact that he's a star matters. I didn't think there was a ton of buzz behind a Moreno title shot, or an Alex Perez title shot. So book a very attractive fight between Figueiredo and Garbrandt, and have Moreno and Perez battle it out for the next shot. That was the original plan, and I thought it was a good plan.

But plans change. Saturday turned into a flyweight showcase. And with Moreno delivering a spectacular performance against Brandon Royval -- and Garbrandt still dealing with health issues at the moment -- Moreno should be next. Figueiredo agrees. After his win on Saturday, he had a message for UFC president Dana White: "I want to face Brandon Moreno. Dana, make this happen. That's the fight that I want to happen." White said he's on board and the plan is to book that fight for December.

If the UFC opts to go with its original plan and rebooks Garbrandt, I won't be outraged. I no longer think it's the best way to go, but Garbrandt moving to 125 is a big storyline and I won't complain about seeing it.

.@Daico_Deiveson has the potential to be a draw. There's new blood on the rise at flyweight as well as potential fights with No Love and Cejudo. Any of these fights will be very fun to watch. This division was on the brink of extinction and now its gaining the steam it deserves.

Who should be next: Jessica Andrade

Andrade has only one win at 125 pounds in the UFC (a knockout of Katlyn Chookagian last month), but I have no problem elevating her to an immediate title shot. She's a former strawweight champion, and frankly, she's probably (finally) in her best weight class. She started off in the UFC at 135 pounds, and then dropped all the way to 115 because there was no 125-pound division. I believe, whether she wins a title here or not, this is her home for the foreseeable future. And she's the greatest threat to dominant champion Shevchenko.

With Cynthia Calvillo's loss to Chookagian on Saturday, Murphy becomes the highest-ranked option to face Shevchenko if it's not Andrade. But I think we're all pretty much assuming it's going to be Andrade, right? Well, in the event it's not, Murphy can sneak in there, and she's built the winning streak to justify it. But my guess is Murphy will need one more win to get her shot at gold.

Buckley keeps KO streak alive with quick finish in Round 2

Fresh off his viral knockout in October, Joaquin Buckley finishes Jordan Wright in their prelim bout at UFC 255.

Murphy: The closest prefight odds in any of Valentina Shevchenko's four title defenses was -1250 against Katlyn Chookagian. Jennifer Maia garnered praise Saturday night in what was, in truth, a fairly comfortable victory for the champion. Shevchenko has reached a level of dominance that makes any resistance feel more competitive than it actually is. Maia opened some eyes in the second round, certainly. But there was a postfight narrative that she exposed a weakness in Shevchenko's game for future opponents to exploit. That's overstating a strong stanza from the challenger. 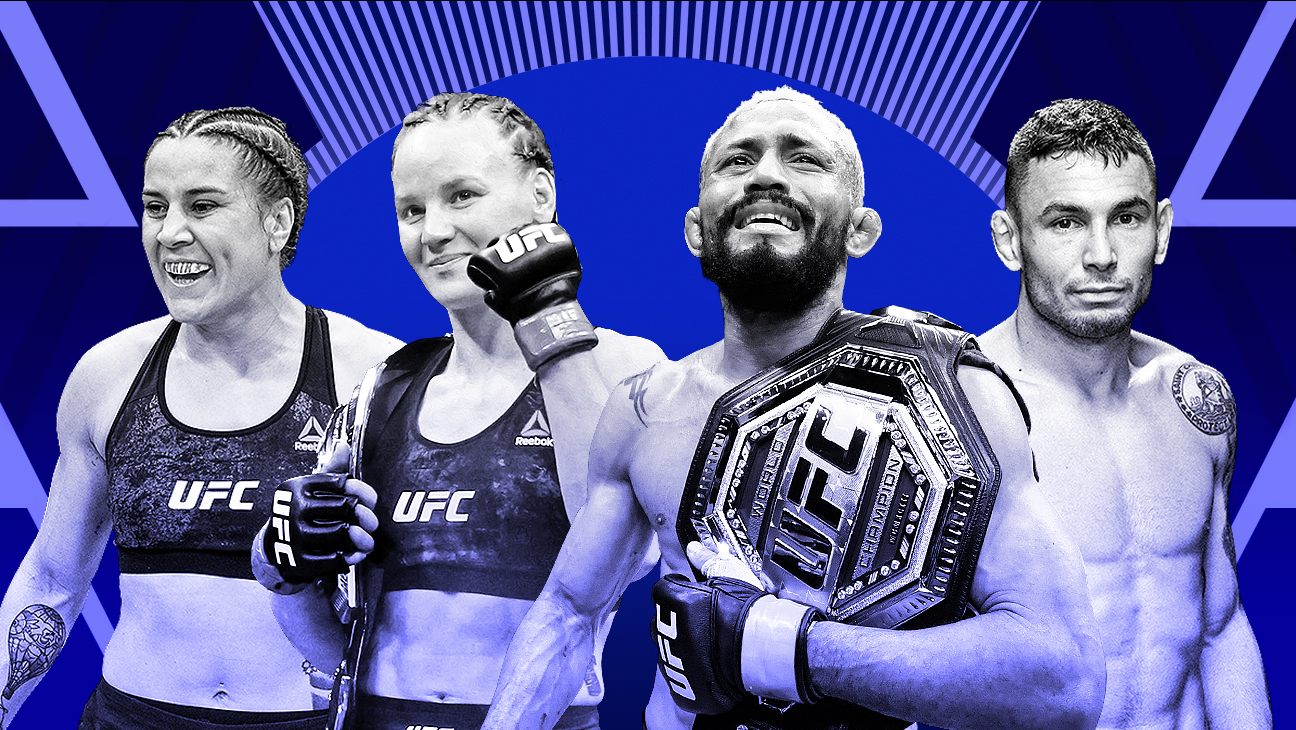 If the pay-per-view is purchased, all fights from UFC 255: Figueiredo vs. Perez will be available to watch on ESPN+.

Shevchenko punctuated the fight emphatically, pulling away over the final two rounds. No doubt remained who won or even by what margin. It was as clear a 49-46 as judges could want. There's been a similar challenger bias with all-time greats such as Demetrious Johnson and Georges St-Pierre, in which the expectation is that they should outclass every opponent at every turn. Competitive rounds, and certainly those lost, stick in the memory more than the lion's share that affirms a champ's superiority.

Shevchenko was marvelous and well-rounded again. She's not bulletproof. But she doesn't need to string together many more flyweight defenses, especially surveying the current crop of challengers across the division.

Joaquin Buckley is no one-hit wonder

Raimondi: Buckley uncorked one of the most ridiculous knockouts of all time, a spinning back kick KO of Impa Kasanganay, last month. What made it so notable was the setup. Kasanganay caught a Buckley kick, then Buckley used the leverage from Kasangany's own grip to spin and kick him in the face with the other leg. It almost defied physics. Kasanganay was out on contact. Buckley's TKO win at UFC 255 was a bit more traditional -- he mashed Jordan Wright with a huge punching combination. Wright's eyes rolled back in his head -- the same way Kasanganay's did -- on impact.

Despite the pressure of trying to top the most viewed knockout ever on UFC social media, Buckley still put forth a highlight-reel finish Saturday. He has all kinds of power and has the makings of a future star in the UFC. Buckley is still only 26 years old and he's not a full-time fighter. His job as an assistant manager at Walgreen's has precluded him from traveling from his native St. Louis to Michigan to train at budding camp Murcielago MMA. He did train there prior to this bout and it seemed to make a difference. Buckley is more than one to watch: He's a must-watch.

At this point, it would be wise for the UFC to match him carefully, like an up-and-coming prospect. People are going to be expecting Buckley fights to be stand-up wars with spectacular finishes. Someone like Punahele Soriano would fit the bill nicely. But it would be a mistake to push Buckley up the card too quickly. After all, he has already been knocked out by Kevin Holland.

Buckley called out James Krause after the fight, although Krause fights at welterweight. Krause has been critical of Buckley recently and it did not go unnoticed.

Marc Ratner is invaluable to the UFC

Wagenheim: Every single time I've been at cageside for a UFC event, the night has not passed without a between-fights visit from Marc Ratner. He'd stroll over to press row and exchange pleasantries, not as part of some professional networking strategy but with a congeniality and care that were wholly genuine. He really did want to know how you were doing. He'd smile widely as you complimented his scarf -- there was always an elegant one draped around his neck. The man has style and oh so much substance.

But my personal affinity for him aside, I was excited to hear the announcement that Ratner, the UFC's vice president of regulatory affairs, will be inducted into the promotion's Hall of Fame because he is a most deserving honoree. Whatever you think about the Hall, which has no independent voting panel and is really more akin to a sports franchise's ring of honor, Ratner warrants special recognition for his invaluable contribution to the growth of the UFC and MMA in general. When he joined the promotion in 2006, MMA was still illegal in several states. It took Ratner 10 years to chip away, state after state, before New York became the final holdout to legalize the sport in 2016. This was essential to MMA's advancement from fringe spectacle into the sports mainstream, and Ratner spearheaded the effort.

The UFC Hall of Fame will not be Ratner's first enshrinement. After spending 14 years as executive director of the Nevada State Athletic Commission, regulating many of the great boxing matches of the era, Ratner was inducted into the International Boxing Hall of Fame and also was part of the first class of inductees into the Nevada Boxing Hall of Fame. Now he is being recognized once again, and it is a well-deserved honor for a truly nice man.