Thiago Santos is an explosive light heavyweight. So is Johnny Walker. Neither showed that on Saturday night. Circumstances were stacked against them both.

Santos, who won a unanimous decision in the UFC Fight Night main event in Las Vegas, came into the fight with 15 knockouts in 21 career wins. But he had not posted one of those wins since 2019, and three straight defeats had the 37-year-old Brazilian in desperate need of a victory, however it might come. So he fought cautiously.

So did his 29-year-old countryman, Walker, and that was especially uncharacteristic for a flashy striker whose four most recent victories had been first-round knockouts. But Walker had lost two of his last three and was still adjusting to a new training camp. 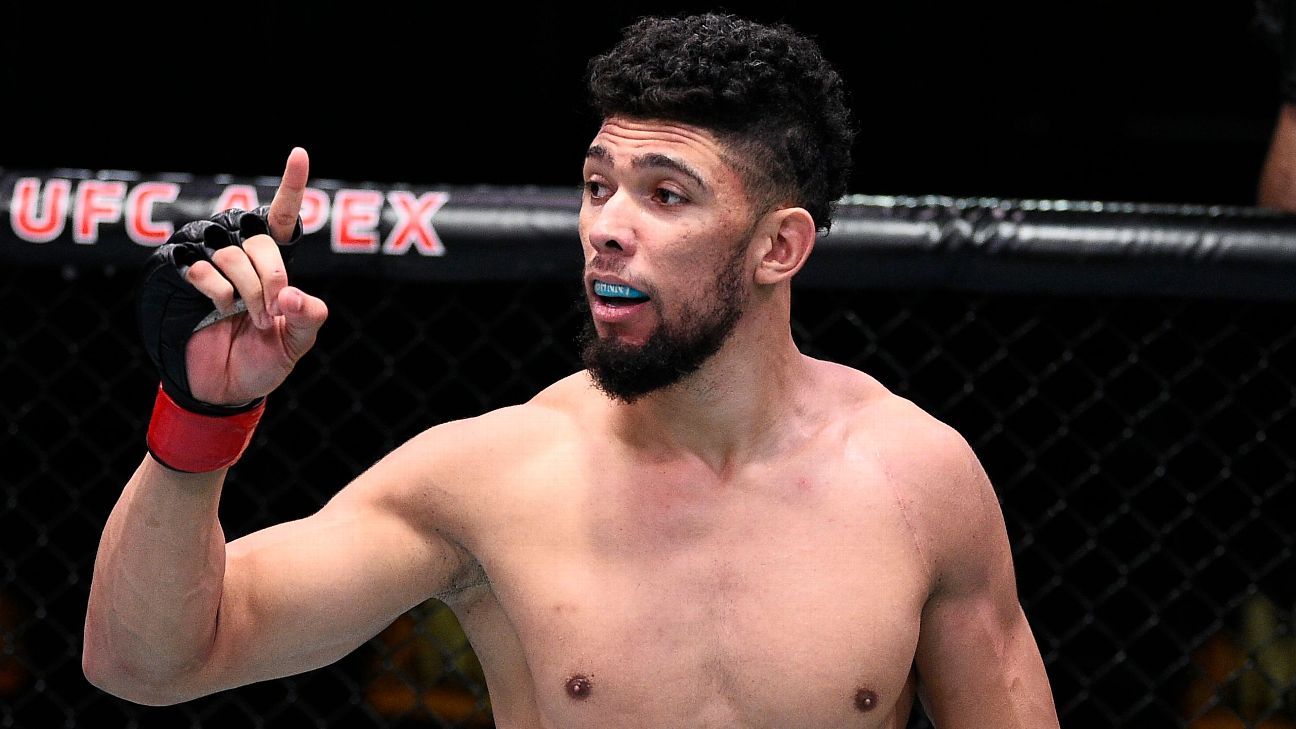 All fights from UFC Fight Night: Santos vs. Walker will be available to watch on ESPN+.

As a result, Santos and Walker did not produce anything close to a classic.

The silver lining for Santos was the "W." For Walker, it was that he showed he can be patient and not get overwhelmed, as he had the last time he was in with a top-tier 205-pounder. He lost to Corey Anderson by first-round TKO in 2019.

The not-so-silver lining for both men: Neither leapfrogged Jiri Prochazka and Aleksandar Rakic, who remain at the top of the pecking order in the UFC's light heavyweight division. One of them is likely in line for the winner of the Jan Blachowicz title fight against Glover Teixeira at the end of October.

Santos, and to a lesser extent Walker, produced something to build on, even if there wasn't a flashy knockdown at the end. But there's more building to do.

Holland spent his training camp working on the biggest weakness that had derailed his rise in the 185-pound division: takedown defense. He ended up on the canvas anyway, but it was not because of his wrestling.

Midway through the first round, there was a bad clash of heads as the fighters moved toward each other, and Holland collapsed to the mat. He appeared to go unconscious, but only briefly.

Referee Dan Miragliotta moved in, and appeared ready to stop the fight. But Holland quickly began fighting again, so the ref backed off. Daukaus seized advantage immediately, though, and when the fight went back to standing, he secured a rear-naked choke to get the tap out at 3:43.

I know Holland has a serious headache right now ! 😬 that head butt was vicious ! #UFCVegas38

Because of the accidental clash of heads, Miragliotta, who signaled for a replay in the immediate aftermath, consulted with commission officials at cageside following the fight. Because Holland had been badly compromised, the bout was ultimately declared a no contest.

If not for the unfortunate finish, the story might have been Holland's improved takedown defense, as he fended off a couple of Daukaus' early attempts to take him down. The 28-year-old from Fort Worth, Texas, worked throughout this training camp with former welterweight champion Johny Hendricks, a two-time NCAA Division 1 national champ in wrestling.

Daukaus, who is 28 and from Philadelphia -- and is the brother of UFC heavyweight Chris Daukaus, who won last week -- did not protest having an apparent victory taken away from him.

It took them about two rounds, but fans got what they expected from two of the most exciting welterweights in the world in Round 3.

After an entertaining, back-and-forth bout, Price was ruled the winner over Oliveira via unanimous decision, as all three judges scored the fight 29-28. The fight came down to the third round. Oliveira was clearly tired, but landed some big combinations on the feet. Price took Oliveira down late and started raining down ground and pound until the bell.

Price swept Oliveira following an Oliveira takedown in the first round and spent almost the entirety of the rest of the round in top position. In the second round, Price slipped on a kick attempt and Oliveira capitalized by getting into strong position on top. Price did a good job attacking from the bottom, but Oliveira was able to take Price's back at one point and land some ground and pound. Price believes his late-third-round takedown and work on the ground is what sealed him the victory.

"That's 100% what did it," Price said in his postfight interview. "That's what I've been working on all camp."

Price, 32, snapped a three-fight winless streak with the victory. The Florida native earned his first victory since he beat James Vick in October 2019. Oliveira, a 33-year-old Brazil native, has dropped three in a row and six of his last eight.

Cirkunov was making his middleweight debut, after losing four of his last six fights at light heavyweight, with all six fights ending in first-round finishes. He made it to the final horn this time, but the result was another loss, as two of the three judges gave Jotko the edge in a close fight.

Jotko, who is 32 and from Poland, used his strong takedown defense -- he came in with the best in UFC middleweight history at 87% -- to keep the fight standing for most of the 15 minutes of action, and Jotko had a clear edge in striking. The victory, his fourth in his last five fights, gives Jotko 10 in the UFC; he joins light heavyweight champion Jan Blachowicz and former strawweight champ Joanna Jedrzejczyk as the only Poles with double-digit UFC wins.

Going to decision was new for Cirkunov, a 34-year-old native of Latvia who fights out of Toronto. In addition to seven straight fights that ended in Round 1, this was the first time Cirkunov had a fight go to a decision since December 2011.

It was exactly the kind of performance Hernandez needed to get back on track.

Hernandez caught Breeden against the cage and strung together several hard combinations, leading to the finish via knockout at 1:20 of the first round. Hernandez put Breeden on his heels quickly, then blasted the mouthpiece out of Breeden's mouth as Breeden tried to evade.

Referee Mark Smith had no choice but to step in and stop the onslaught after Hernandez dropped Breeden with a right hand to the jaw. The sequence started with a Hernandez short elbow. It was all one-way traffic from there.

Hernandez, 29, has won two of his last three, but is 3-3 in his last six bouts. Afterward, the Texas resident called out Leonardo Santos, who had to withdraw from this bout due to injury before Breeden stepped in as a replacement. Breeden, a 32-year-old fighting out of Missouri, was making his UFC debut and had a two-fight winning streak snapped.

Solecki came in riding a six-fight winning streak. Early on, it looked like he was on his way to extending that streak. But Gordon persevered through a difficult first round, in which he was taken down four times, and took control to earn his third win in a row.

I know Holland has a serious headache right now ! 😬 that head butt was vicious ! #UFCVegas38

All three judges scored the bout 29-28, with two of them favoring Gordon, a 33-year-old New Yorker who had an especially strong second round and carried a close Round 3 by being the busier striker and briefly taking the fight to the canvas.

Solecki, 28, who is from New Jersey and fights out of Wilmington, North Carolina, suffered his first UFC defeat.

Valentina Shevchenko is in need of some fresh challengers for her UFC women's flyweight title. She might have just gotten a glimpse of one from across the cage.

The undefeated O'Neill used ground and pound to finish Antonina Shevchenko via TKO at 4:47 of the second round. Valentina was in the corner of her older sister for the bout. O'Neill took Antonina down, got into mount and then landed big punches, elbows and hammerfists from there until referee Chris Tognoni saw enough.

O'Neill, a 23-year-old prospect, is 3-0 in the UFC with three finishes. The Scotland-born fighter, who trains out of Las Vegas, has four finishes in seven career wins. O'Neill is now tied for the longest active winning streak in the UFC women's flyweight division, behind Valentina Shevchenko (8). Antonina Shevchenko, a 36-year-old Kyrgyzstan native fighting out of Las Vegas, has dropped two straight and four of her last six.

Rosa did not give Correia the happiest of Octagon goodbyes.

In Correia's final UFC fight, her Brazilian countrywoman ended up being the victor via unanimous decision, as judges scored the fight 30-27, 30-27 and 30-26 in a dominant performance. Correia was emotional walking to the cage, tears welling up in her eyes. Afterward, she sported a bruised left eye courtesy of Rosa's punches, elbows and knees.

Correia, 38, had just two wins in her last nine fights, dating back to her UFC 190 pay-per-view main event title fight against Ronda Rousey.

"Very emotional moment for me," Correia said in her postfight interview.

Jamie Mullarkey sends Devonte Smith to the mat and finishes him with strikes late in Round 2.

Despite being beaten to the punch again and again by his quicker opponent in the first round, Mullarkey kept moving forward and bringing his power. It paid off in Round 2, when he overwhelmed Smith with volume and got the finish at 2:51.

Mullarkey, a 27-year old Australian, has won two fights in a row, both finishes.

Smith, who is 28 and from Ohio, has lost two of his last three.

Silva de Andrade breaks out the acrobatics after nasty KO

Douglas Silva de Andrade catches Gaetano Pirrello with a left hand to end the fight in the first round.

Silva de Andrade got his first finish since 2016, and what a finish it was. The 36-year-old Brazilian countered a kick with a sharp left hook that sent Pirrello crashing to the mat for a knockout 2:04 into the fight.

Silva de Andrade has won two of his last three, while Pirrello, who is 29 and from Belgium, has lost both of his UFC bouts.

Egger used takedowns in both rounds to control the fight, delivering a ground-and-pound beatdown in Round 2 to get the stoppage for her first UFC victory.

The 33-year-old from Switzerland, who had dropped her Octagon debut a year ago, had to fend off a submission attempt from Young in the first round. But in the second, Egger's offense was too much for Young, and shortly after Egger dropped a big elbow to Young's face, referee Mark Smith jumped in at 2:22 to end it.

Young, who is 30 and fights out of Knoxville, Tennessee, has lost both of her UFC bouts.

Perez had not fought since July 2019, so he took a while to get going. But after being taken down early in Round 2 and having to battle his way back to his feet, he turned things around quickly. Perez took Eduardo to the canvas and locked in a straight armbar to get the finish at 4:13.

The 32-year-old Perez, who is from Mexico and fights out of San Jose, California, ended a two-fight losing streak.

Eduardo, a 43-year-old Brazilian who had not competed since June 2018, lost his third in a row.

Wow an armbar finish with the legs in the crucifix position. Very impressive. 🙏🏽 #UFCVegas38