Last spring, family friends journeyed to Dallas to watch their son's hockey team play in a tournament. At the hotel, they cruised up to the concierge desk and asked the nice young woman for directions to the Dr. Pepper StarCenter.

"Sure," said the concierge. "But which one?"

Our friends didn't have a clue there were multiple Dr. Pepper StarCenter rinks in the Dallas-Fort Worth Metroplex. The mystery was solved with a couple of phone calls and foolproof directions were formulated, complete with allowances for Texans' fascination with one-way frontage roads. 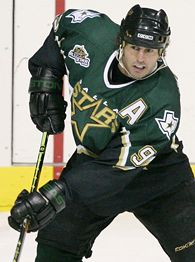 But the point was made: Youth hockey is booming in Dallas.

The Stars' enthusiastic sponsorship of the rink construction was crucial, but in the chicken-and-egg department, the rinks wouldn't have been built if there weren't sound, or at least perceived to be sound, business reasons to do so.

Then, a couple of months later, U.S.-born players went 1-2 in the NHL entry draft for the first time, with Patrick Kane going to the Blackhawks and James vanRiemsdyk to the Flyers.

No, those two dots -- rinks in Dallas-Fort Worth and what happened in the 2007 NHL draft -- can't be connected with an unbroken line, signifying cause and effect. Yet they are part of a bigger overall picture.

The "Miracle on Ice" didn't do it alone.

USA Hockey's founding of the National Team Development Program in Ann Arbor, Mich., 10 seasons ago was important for the nurturing of the top-of-the-line American talent. Kane and vanRiemsdyk both came through that program, as did Colorado Avalanche choice Kevin Shattenkirk (No. 14 overall) and St. Louis' Ian Cole (No. 18). NTDP graduates, such as Rick DiPietro, Ryan Whitney, Ryan Suter, and John-Michael Liles, are scattered throughout the league.

Last season, there was an average of about four U.S.-born players on NHL rosters. The evidence of the last two drafts, when one-third of the first-round choices were American-born, is convincing: That number almost certainly is going to increase over the next decade.

"It is part of the report card on how our National Team Development Program is doing," USA Hockey executive director Dave Ogrean said from his office in Colorado Springs, Colo. "It is a somewhat inspirational element, I hope, for certain young people to take up the game seriously, or to take up the game for the first time."

But there are still some roadblocks.

"Now you are dealing with a sport that has a much larger critical mass, but a sport that will always have somewhat of a drag on its growth, by two things," Ogrean said. "One is facility dependence. If there aren't a lot more rinks, you can't get a lot more people playing. You can tweak the system, but you're not going to have 20 percent growth if your number of rinks grows by 2 percent.

"And two is cost, which is a barrier we would love to knock down, but there are realities. Every time you pay more for a gallon of gas than you did five years ago, guess what, the rink is paying more for utilities and it all gets more expensive. From that standpoint, regardless of whether we have one player in the NHL or all of the first-team All-Stars, there are still some drags on our ability to grow as quickly as we would like to."

Yet, Ogrean said the draft illustrated the "success of the whole American development ladder, and I don't want to give all the credit to the Ann Arbor program. Certainly, what has gone on in junior hockey, especially with the United States Hockey League, deserves a lot of the credit, as do the American college programs at the Division I level. That's where most of our Ann Arbor graduates go for a year or more. I think all of that means the tide has been rising overall for several years and will continue to rise."

Twenty-one years ago, the best American-born player of his generation, Mike Modano, went to play major junior with the Prince Albert Raiders, in essence following the more traditional route -- through the Canadian Hockey League, whether that meant with one of the handful of U.S.-based franchises under the major junior umbrella or in Canada itself.

Perhaps today, under similar circumstances, and especially because he was from the Detroit area, Modano would have ended up in the NTDP before deciding when to make the jump to the NHL -- with or without some intervening time in NCAA hockey.

Kane took a mixed approach, playing first in the NTDP before spending last season with the London Knights of the OHL. Southern California native Jonathon Blum went to Vancouver, British Columbia, to play major junior with the WHL's Giants, and he went in the first round to the Predators. 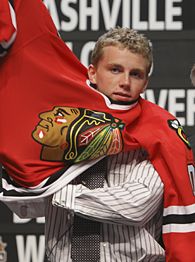 So that path hasn't been shut down, but it's not the no-brainer choice it once seemed to many, when NHL scouting evaluations were heavily biased in favor of Canadian major junior products.

"There are a lot of kids in the past who went to play major junior because they were told, and there was some evidence to suggest it, that it was the best way to make it to the NHL," Ogrean said. "You can't make that claim anymore. There are great Americans going up there to play who are getting drafted high  but you had the top two picks this year and the first and fifth picks from the year before [Erik Johnson and Phil Kessel]. Both were either in or were recent graduates of the Ann Arbor program.

"So, I think a greater amount of Americans are looking at this as a more viable, if not preferred, option because they're closer to home, they're treated exceedingly well and they leave their options open educationally, in terms of college eligibility."

In the past, one of the significant arguments against major junior was that the prolike schedule and conditions meant major junior's professed attention to the players' ongoing education was often nothing more than hot air. The American routes now can lead to the same sort of cavalier attitude about junior players' educations, most notably when they are of high school age, but at least they preserve the NCAA option. And with more college players stepping virtually seamlessly into the NHL, even if it's only after a transitional year or two in school, that makes more sense than ever, too.

But that's only at the elite level. USA Hockey's mandate is to nurture the sport from the pure participation level from the youngest ages on up, and that's where rink construction in such NHL markets as Dallas and Denver over the past 10 to 20 years comes into play. The NHL nurtures interest, whether that's of the grandmother knitting an afghan for Paul Kariya and swearing like a longshoreman at anyone who dares to hit him, or the young (or young at heart) athlete who just wants to play -- or something in between.

"For the criticism that [NHL commissioner] Gary Bettman sometimes gets for what he has done with television over the years, his goal of giving the league a national footprint has been very beneficial for us," Ogrean said.

It's not enough to say: Which way to the rink?

Terry Frei is a regular contributor to ESPN.com. He is the author of "Third Down and a War to Go" and the upcoming "'77."