STATELINE, Nev. -- Brianna and Austyn Rowland smiled for their wedding photographer moments after tying the knot at a Lake Tahoe resort on Sunday. Snow-capped mountains filled the horizon. The sun glistened on the water.

The couple had imagined most of this scene in the months leading up to their nuptials. But the NHL mascot, and the outdoor hockey game between the Flyers and Boston Bruins held steps away from their reception, were unexpected gifts that they found out about only on the morning of her wedding day.

The NHL played two games at the Edgewood Tahoe Resort last weekend, building an outdoor rink on the 18th fairway of its golf course. Because of COVID-19 protocols, there were no fans in attendance save for the ones who watched the games from boats on the lake.

The games between the Colorado Avalanche and Vegas Golden Knights on Saturday and the Flyers and Bruins on Sunday were announced on Jan. 11. The League hoped it could take over the resort's facilities, including its event spaces, but Edgewood had a wedding booked on Friday, Feb. 19, and the Rowlands' wedding set for Sunday, Feb. 21.

When Brianna Rowland heard about the outdoor games, she thought the resort would move the wedding, but the couple was reassured that the wedding was going to be accommodated despite the NHL takeover.

"[The NHL] was waiting for the weddings to cancel. And we were like, 'Nope, these guys aren't canceling. We're going to have to work around them,'" said Siobhan Fajayan, director of marketing for Edgewood Tahoe Resort. "We gave both of those weddings a heads-up ahead of time, in that we were going to have a rink set up in the background and there might be a little extra noise."

Also reassuring to the Rowlands was the start time of Sunday's game. Their ceremony was at 3:30 p.m. The game was scheduled for noon. In the week leading up to the game, the news got even better: The NHL shifted the Boston vs. Philadelphia game to 11 a.m. out of concern for sun glare.

But the league's plans shifted dramatically on Saturday. The forecast for Sunday's game showed clear skies and bright sun, so the NHL moved the start time for the Bruins and Flyers to 4:30 p.m. The Rowlands went from having their reception after the NHL game was over to holding it during puck drop.

"We were all like, 'Great, we're in the clear.' Then when the game got moved to 4:30, we were hoping they were OK with it," Fajayan said.

The bride said she didn't learn about the time change until she was in the makeup chair on the morning of her wedding.

"They were doing my makeup and they were like, 'The game is at 4:30 now.' And I'm like, 'Oooookay,'" she said. "That's fine. At that point I was just excited for the wedding. They were making everything really convenient, so we didn't mind that it was going on any later."

The couple had a few concerns with an NHL game taking place within eye-shot of their wedding.

"On previous days, like when we did our walk-through on Saturday, we would see the other guests that were staying at the hotel in their jerseys, walking around and trying to get a glimpse of the [rink]. I was just worried about somebody having a few cocktails and starting to yell," said Austyn Rowland, 27.

"We were excited that we were having a wedding at the same time as an iconic game," Brianna Rowland said. "But honestly, we just didn't want hockey players walking through the middle of the ceremony."

They were also concerned that their guests might gravitate toward the professional hockey game rather than their wedding reception.

But because of COVID-19 protocols and general security concerns, access around the rink was restricted. While guests could see the rink from the venue, they couldn't see much of it.

After their wedding ceremony, the couple was invited to take photos at the rink before the game. They climbed into a golf cart under a blanket and drove out to a riser on the far side of the ice that was reserved for media. On the way, the hockey fans in kayaks and boats cheered for the newlyweds as they sped by.

That's where the bride and the groom met Gritty from the Flyers and Blades, the Bruins' mascot.

"We took a photo by ourselves, and then they ran up and jumped in," Brianna Rowland said.

The mascots weren't shy about with whom they wanted to pose. "They didn't want one with Austyn in it," Brianna Rowland said, laughing. She hand-made her wedding dress and has her own design company, Brianna Helton Designs. 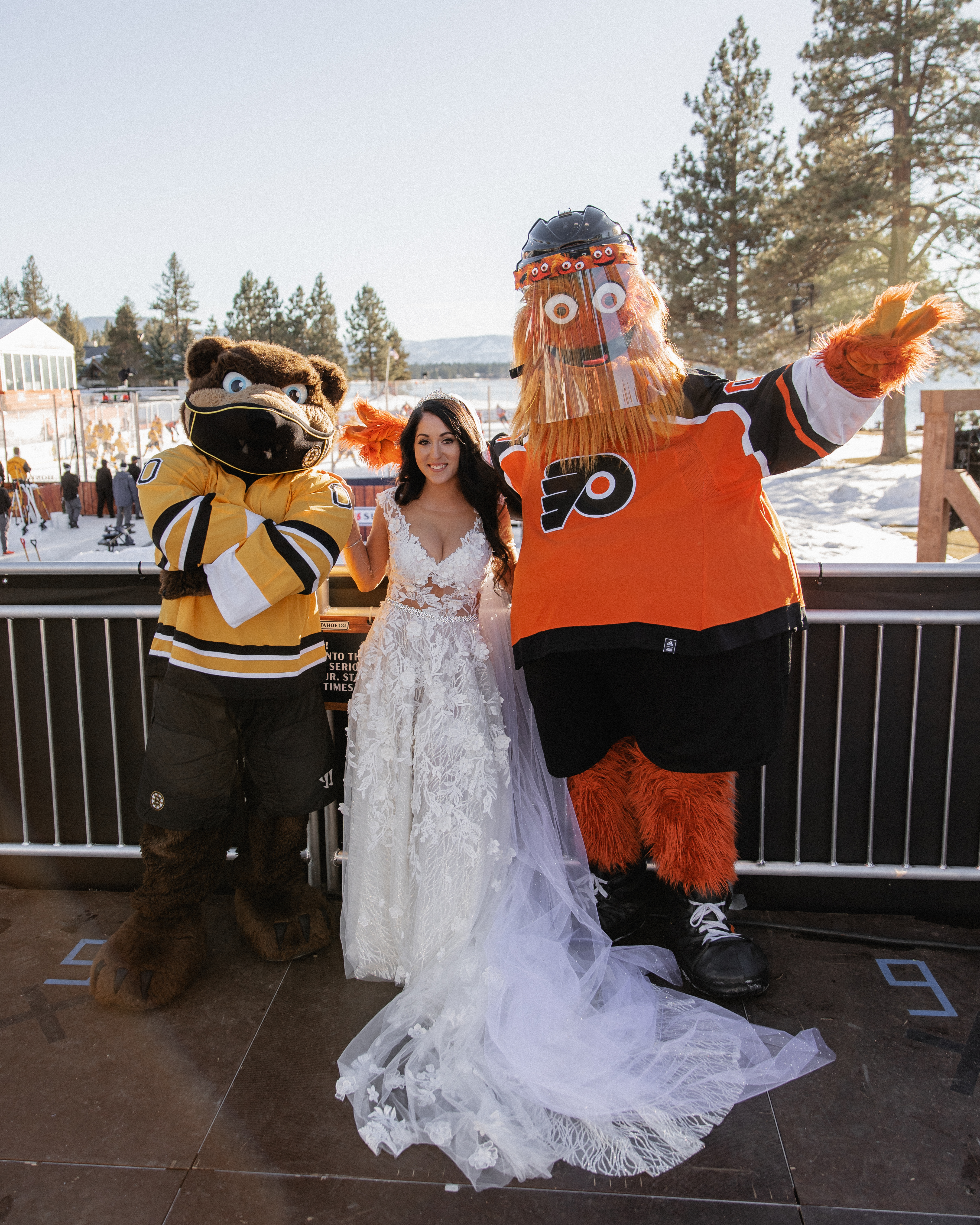 Eventually, the groom entered the picture.

"I've only seen little glimpses of Gritty on YouTube videos that [Austyn] showed me. But we had a little idea of what he does," Brianna Rowland said.

Back at the reception -- an intimate, 31-person gathering thanks to COVID protocols -- the guests wouldn't have known there was an NHL game being played were it not for the bright lights visible through the venue's windows. Some hockey fans watching the game back home reached out to wedding guests when they saw Instagram stories tagged from the Edgewood Tahoe Resort.

The NHL on ESPN+

Catch NHL games streaming live every night (and on replay) this season on ESPN+. Click here for the upcoming schedule and to learn how to subscribe.

"We had a couple of people at the wedding who were big hockey fans," Brianna Rowland said. "They wished we had told them before the wedding that the game was here. But we didn't tell everyone about it. We just let them find out for themselves."

The Santa Clarita, California, couple admit, with a certain amount of irony, that they're not exactly hockey fans themselves. Austyn has an affinity for the Los Angeles Kings as his local team. Brianna doesn't follow the sport, but said "when they told me the game was happening, I wished I watched more [hockey]."

Whether they watch it or not, hockey is now an indelible part of their wedding day, from the mascots invading their photos to the Bruins' 7-3 victory that took place steps away from their reception.

"I saw it as an awesome experience," Austyn Rowland said.