Rio -- Sania Mirza's teary eyes have just stared back at me. She does not want to be there, answering questions, digging for reasons to explain the defeat that ends her medal hopes.

It has just gone half past one in Rio. Earlier in the morning, I scramble into the badminton arena in a desperate rush, only to miss the last bit of Saina Nehwal's shock capitulation. She points to her heavily strapped knee and glumly exits from the facility.

I am at my first Olympics and I have not seen an Indian medal yet. I have seen heartbreak by the bucketful. The Abhinav Bindra near miss. The Gagan Narang implosion. The Jitu Rai stumble. The nearly there Archery girls. Today, I miss watching the hockey boys being packed off. There is just one boxer standing.

"Look for the arena with the pink roof."

Volunteers at Olympic park in Rio smile easily. They are happy to help. I am snaking my way through a stream of people towards the Gymnastics complex. I see some Swiss people raucously celebrating. One of theirs must have won a medal somewhere, I guess.

My Olympics is following a consistent narrative. No medal. No joy. Little morsels of celebratory stuff, but it is turning out to be all just the same.

Gymnastics is a showpiece event at the Olympics. Tickets are priced higher than most other events. It is contested in a monstrously large arena with a ridiculously high ceiling. The flags of the competing nations in Gymnastics flutter gently off the ceiling.

A journalist colleague starts to count them. I learn that 60 countries are represented by 196 athletes in the 16 events here, the grandest stage in Gymnastics. I photograph the Tri-colour at the extreme end. A 23-year-old girl from Agartala has created this space for it. She is the only Indian here. One in 196.

The arena is throbbing as I make my way up towards the media seating. Two Brazilian gymnasts have won silver and bronze in the Men's floor exercise finals. There are tears and hugs. Liquid emotion is the precursor to what we have come to see. This girl, an inch short of five feet tall, is the first Indian gymnast to qualify in 52 years for an Olympics, man or woman.

On the official literature of the Olympics, they describe the sport as Artistic Gymnastics. Colleague Sharda Ugra describes here why that is. As the clock ticks over to 2:47pm local time, eight women march elegantly out. An American, a Russian, a Chinese, a Swiss, a North Korean, an Uzbek, a Canadian and the girl from India.

There are innocent smiles and graceful waves as they are introduced. We are all friends here, let's contest for an Olympic medal, but it is not really a fight, is it? Artistic Gymnastics, remember?

Dipa Karmakar is designated as the sixth jumper. This order is decided randomly. The competition begins and I watch five girls sprint up to complete unreal contortions mid-air before landing. Some do it better than others. They do this twice each and the cumulative scores pop up on the big screen as well as in little boxes on my computer in the official scoresheet.

Her time comes and Dipa is on top of her mark. She bursts off in a phalanx of energy and her first vault is what they call the Zamolodchikova. I look up, and they have scored it at 14.866.

Not bad. But not awesome. 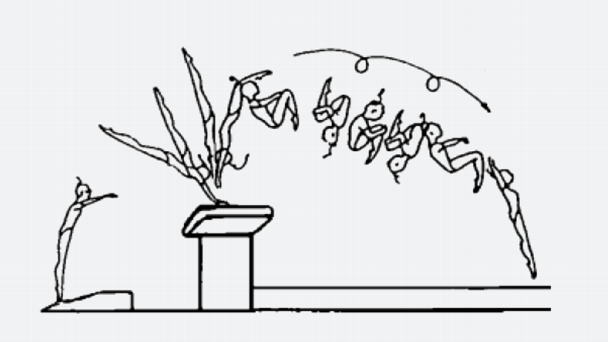 The Produnova is a forward handspring double-somersault - the gymnast springs forward off the board onto the vault, performs two somersaults before landing feet first, with her back to the vault. It has the highest points (7) value of all the vaults in women's gymnastics.

Who is it named after?

After Yelena Produnova, a Russian gymnast who executed it perfectly in 1999.

Why is it special?

It is seen as especially difficult for women gymnasts, who have to generate enough upper body strength to propel them high enough in order get two front somersaults going in the air and give themselves enough time to land correctly on their feet.

What are the risks involved?

Two specific dangers: One, not nailing the landing correctly and therefore landing not on your feet but on the tailbone, risking injury to the spine and the neck. Two, if the knees cannot take the load well enough, there is a danger of the gymnast toppling over and falling on her face.

And now the Produnova. As pointed out by a journalist, if Sushil Kumar introduced the "Repechage" to Indian sports fans at the Beijing Games in 2008, Dipa can claim credit for the "Produnova" making its way into our lexicon. I ask the Gold medalist Simone Biles later what it is about Dipa that impresses her: "Well, I would never attempt the things she does."

On Saturday, Dipa's coach Bisweshwar Nandi tells me Dipa is now "comfortable" executing it. Fun fact, worth repeating - only five women in the world have successfully landed the Produnova.

Slow clap. The announcer is reminding a packed stadium that this is the first Indian ever in a Gymnastics Olympic final. I am standing now, the nerves are shot.

Whizzzzz. She boomerangs off. The Produnova is unleashed. Coach Bisweshwar Nandi would tell me later that the decision to keep her signature jump as the second one was taken because Dipa traditionally does a better first jump. By flipping it around, he wanted to maximise her score.

Nandi is the tactician, Dipa the executioner. Dipa nails it and the audience swoons. I go, "Wowwwww". You can hear the applause all the way from Agartala.

And then we wait for what seems like an eternity. Dipa's second vault takes the longest to adjudge of all the competitors. Tick tock. And then, activity on my computer screen and the big screen in front.

The Produnova delivers 15.266. Her cumulative score is 15.066. Sweaty palms are doing the calculations. And then confirmation.

Two girls left in the final. Dipa is in second spot. One of them has to make an error or not do their vaults as well as Dipa, and India's first medal at Rio will be delivered courtesy a Gymnast. Not a shooter. Not a boxer. Not a tennis player. There is pandemonium in the hall, but Dipa is serene in her acknowledgment of generous applause the crowd gives her.

"I told Nandi sir then itself that I will come fourth," she tells me later. In this cauldron of emotion, she has done the math. She knows the incredible Biles is to come. And she knows Maria Paseka of Russia, who is up next, will not slip up.

There is a tweeting tornado back home in India where it is nearing midnight. Dipa knows she won't leave Rio with a medal, yet she is smiling.

Paseka and Biles finish things off and the podium places are determined. Yet, even as the scoresheet settles, there is an outburst of glee.

I start to cry, quietly in my corner so they would not call me a wuss. But you know what this girl has done. She has lifted a rapidly descending pall of gloom. She has shut up social media know-it-alls taking pot shots at her fellow athletes.

She has made the unreal believable. Not long back, two warring Gymnastics federations - not an unusual occurrence in India - demanded that Dipa compete at their nationals or else she can't go to Rio for a Test event. The good people at Go Sports foundation urged the Sports Authority of India to sort the mess.

Somehow, they did. Dipa won the gold at that Test event, qualified for the Olympics, and returned to Rio to do this.

At the mixed zone, where journalists are allowed in to interact with the athletes, a swarm of quote seekers hunt Dipa. She is cheery and upbeat. A veteran among us asks, "Dipa, you do know that great athletes like PT Usha and Milkha Singh have finished fourth at Olympics before?"

"Arreeey sir," she chuckles. "These are very big names. Please don't compare me with them."

"Dipa, you are my hero," tweets Abhinav Bindra.

Not just yours, Abhinav. On this day she contributes to uplifting the happiness quotient of a nation.

Grandiose as that sounds, her two leaps tug at the hearts of the biggest cynics. Surely, medals alone are not a measure of accomplishments. Today, Dipa reminds her audience what sport must essentially be - a pursuit of victory yes, but also a celebration of the human spirit.

In that auditorium, she is a darling. Beyond it, she is a hero. Giulia Steingruber of Switzerland, who clinches bronze records a score of 15.216. Dipa loses out by 0.15 points. Almost every other time, this sort of outcome has led to gasps of despair. Not today. It does not matter.

"Sure," she chimes. "You can achieve anything you put your mind to."