INDIANAPOLIS (AP) -- Michael Jordan has never played this poorly
in his NBA career. 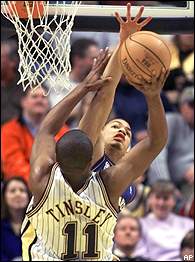 Jordan scored a career-low six points on 2-for-10 shooting as
the Indiana Pacers beat the Washington Wizards 108-81 Thursday
night.

Jalen Rose scored 26 points and Jamaal Tinsley added 16 points
and 12 assists as the Pacers won their fourth in a row, and 10th in
their last 14.

Jordan played only 25 minutes and failed to make a field goal in
the second half. The last time Jordan failed to reach double digits
was March 22, 1986, when he scored eight points against Cleveland -- his previous low. He had reached double digits in 866 consecutive games.

By the time he left with 3:23 remaining in the third, the
Wizards trailed 78-52. Jordan said he never thought about
re-entering the game to score more points.

"I knew where I was in terms of that," Jordan said. "I'm not
here chasing any individual accolades. If I felt that was an issue,
and I wanted to chase it, I could have easily gone up to Doug
(Collins) and said I wanted to go back in."

Jordan missed four of his first five shots to start the game
before being substituted by Courtney Alexander with 2:13 left in
the first quarter.

He didn't return until nearly six minutes into the second
quarter and finished the half 2-for-8 for five points. Washington
was playing without injured starters Richard Hamilton and Christian
Laettner, making Jordan the lone target of the Pacers' defense.
Rose received most of the defensive responsibilities.

Jordan, who is battling tendinitis, sat on the bench most of the
second half with his legs stretched out and ice packs on both
knees.

Collins, in his first year with the Wizards, downplayed Jordan's
points total.

"The reason he had a career low is because I didn't play him 12
minutes of the game," he said. "I'm not going to play Michael in
that type of situation. He could have gone out the last eight or 10
minutes and scored eight or 10. That's not what this is all about.
Nobody likes to get beat like we got beat, but I'm not going to put
Michael out in that type of game."

The Wizards, who played their third game in a row without
Hamilton, their second-leading scorer who has a strained groin,
have lost two consecutive following a team record nine-game winning
streak.

The Wizards took a two-point lead midway through the first, but
were outscored 19-8 the rest of the quarter.

Rose scored 15 points in the first on 6-for-10 shooting to help
him bust out of a horrendous slump. He had shot 21-for-79 in his
previous six games, including 1-for-12 Wednesday night against
Orlando.

"I'm a rhythm player," Rose said. "Any time that rhythm is
disturbed, it just takes a minute to get it back going.
Fortunately, it was there today."

Rose stayed away from outside shots and tried to score in the
paint on layups.

"Opportunity allowed for guys to get me the ball in position,"
Rose said. "There's no excuses. You're supposed to knock every
shot you take. I'm not here to make excuses for good or bad
games."

The Pacers pushed their lead to 55-43 and then took off in the
second half. They scored the first 10 points of the third quarter,
while the Wizards missed their first 10 shots from the floor.

The Wizards missed 14 of their 16 shots in the third quarter.
Rose and Jermaine O'Neal, who scored 10, combined for 15 points in
the third as the Pacers led by as many as 29 points.

The Wizards were coming off a 99-93 defeat against Charlotte on
Wednesday. Jordan said fatigue wasn't a factor.

"You can blame a lot of scenarios -- traveling, back-to-back
games or whatever," Jordan said. "We played with no continuity.
Defensively, offensively we didn't have nothing. They came out with
more motivation."

Game notes
The Pacers are one game behind Milwaukee in the Central
Division. The Bucks were off Thursday. ... The Pacers are the first
team in the division to win 18 games. ... Indiana is five games
over .500 for the first time since the end of the 1999-2000 season.
... Jordan scored 21 points on 8-for-26 shooting against the Pacers
on Nov. 22. ... Reggie Miller failed to reach double figures in
points for the first time this season. He scored five points.