You'll notice that Tim Duncan does not make the list. 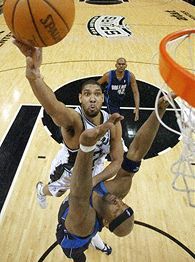 In fact, I could list a million things that bore me -- ironing, Stone Phillips, Austria -- without mentioning Duncan.

I could list a million boring sports things -- cricket, free agency, throws to first to hold the runner -- and No. 21 for the San Antonio Spurs still would be nowhere near making an appearance.

I don't just respect Tim Duncan -- everyone does that. I'm entertained watching him play basketball.

I love the bank shots, the drop steps, the efficient post moves, the intelligent passes out of double-teams, the two-hand rebounds, the refusal to force anything. I've enjoyed watching him hang 31 points and 11 rebounds a game on the Dallas Mavericks in a ding-dong series so far, and I can't wait to see him play Monday night against the Mavs in what verges on a must-win playoff game.

This apparently makes me un-American enough that the NSA soon will be listening to my phone calls.

Enjoying Duncan runs counter to a state university-sized school of thought that says the most accomplished player in the NBA is test-pattern dull. Skip and Woody actually agreed on something last week on "Cold Pizza" -- that the Spurs (i.e., Duncan) are boring. And Madison Avenue clearly sees it that way, given its shunning of Duncan as a national pitchman.

Dwyane Wade will put you in a swell pair of shoes. Shaq will tell you how to care for your aching muscles. Even onetime pariah pitchman Kobe Bryant has made a commercial comeback, trading on his anti-hero status.

Vince Carter is selling a wireless service during the playoffs. That's nice. When the Heat are finished with Carter and the Nets, he should have enough free minutes to call Duncan and ask him what winning a championship or three feels like.

I hear we're all witnesses to LeBron James' ascendance. While I won't dispute that, I'm wondering how commercial America failed to witness the Duncan phenomenon that preceded it.

The two-time league MVP and three-time NBA Finals MVP, the first player ever to be named first-team All-NBA in each of his first eight seasons as a pro, the guy who pushed himself through 80 regular-season games with plantar fasciitis, the perfect teammate, the caring community presence, the ideal face of a franchise? Guess he's too stoic and too solid to sell.

I look around the league and simply don't get it. I see repetitive stories about the anti-Duncans and yawn.

Overexposed and underprepared point guard Sebastian Telfair playing just 24 minutes a game for a 60-loss team? Hardly the stuff of books and documentaries, is it?

Larry Brown and Stephon Marbury hissing at each other through the tabloids during a train-wreck season? Utter boredom.

Amid this fool's parade, isn't there some love to be found for the Big Fundamental?

Yes. Turns out you can find it from predictable and unpredictable sources.

"He's fundamentally sound, a fearless, determined champion, someone who didn't feel like he already knew everything, who puts the team first -- those were throwback virtues and attributes. Those were things that made the old Celtic teams great, but today that's not true. Today's game is style over substance. He's the opposite. He's substance over style.

Unpredictable? How about Ron Artest, the NBA's Jesse James to Duncan's Wyatt Earp. The combustible Sacramento King told Dime Magazine this season that he likes the way Duncan plays.

Artest explained: "I remember one time Kevin Garnett was mushing him, and shoving him in the face; and Tim Duncan didn't do anything, he didn't react. He just kicked Kevin Garnett's a--, and won the damn championship. You know what I'm sayin'? That's gangsta. Everybody can show emotion, dunk on somebody, scream and be real cocky; but Tim Duncan is a ... he's a pimp."

Only the creative cloudy thinking of Ron Artest could put "Tim Duncan" and "pimp" in the same sentence -- but that's part of the big guy's marketability deficit. In terms of swagger, he's more plumber than pimp. He's as edgy as a sphere.

The closest he's come to being controversial is complaining about David Stern's new dress code (Duncan isn't comfortable without his shirttail hanging out, and he's not a suit-and-tie guy). He doesn't need big-city bling, being perfectly comfortable in the relative obscurity of San Antonio. And he's a lousy self-promoter.

"He doesn't let us into his life," said San Antonio Express-News columnist Buck Harvey. "Probably my first interview with him was as good as my last one. But in this business you can kind of respect that. He isn't trying to get in good with the media.

"My impression, if you were to know him as a teammate and a friend, he wouldn't be boring at all. He's very smart and has a great sense of humor. He just doesn't want to put that out there."

The Duncan we don't see is the guy who came over to Odom's house for dinner last October, the night before an exhibition game in Columbia, S.C. -- and fretted because he didn't have anything nicer to wear than his sweat suit. The Duncan we don't see sat in Odom's living room talking to the coach and his wife for hours after dinner, then dropped by South Carolina's practice the next day to work with the post men on a few drills.

Odom reports that the Gamecock players were not bored by Duncan's presence.

Turns out they're not alone. There might be a peasant revolution underway when it comes to Duncan and his Q Rating.

My jaded assumption was that Duncan would rate depressingly low on the "cred" scale. Instead, he leads the league and ranks behind only Tiger Woods and Tom Brady among "SportsNation's most cred-carrying athletes."

I nearly wept. Boring, at last, is beautiful.

Pat Forde is a national columnist at ESPN.com. He can be reached at ESPN4D@aol.com.