The bad news for Conor McGregor fans is that he was knocked out by Dustin Poirier in the second round of their UFC 257 main event in Abu Dhabi, United Arab Emirates, early Sunday morning.

The good news for fans of the Irish superstar? Their man immediately recognized he had not been at his best in this fight, understood why and had a plan for making himself better the only way he knows how: by fighting more often.

"It's hard to overcome inactivity over a long period of time," McGregor said after just his third MMA fight since 2016. "I just wasn't as comfortable as I needed to be, you know what I mean? It's inactivity, and that's it." 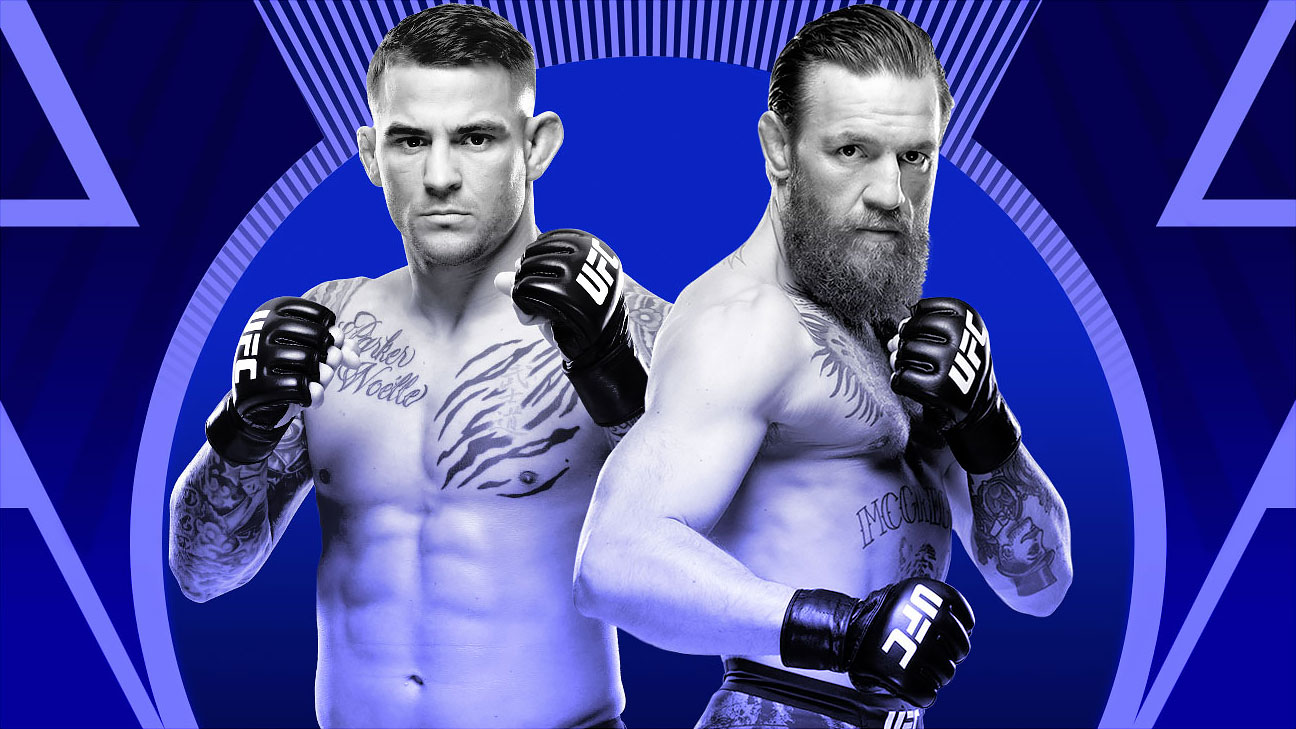 If the PPV is purchased, all fights from UFC 257: Poirier vs. McGregor 2 will be available to watch on ESPN+.

McGregor started well enough, landing a left hand right out of the gate that got the attention of Poirier. The fight quickly became a clinch battle against the cage, negating the vaunted power of McGregor, and Poirier got a takedown and briefly had control on the mat. Once the fighters were back on their feet, Poirier started landing calf kicks, damaging McGregor's front leg. Despite all of this, McGregor took the first round on the scorecards of all three judges.

But it wasn't playing out like a McGregor fight circa 2016. He was absorbing those immobilizing calf kicks, and though he did land some straight left hands, he never connected in a way that slowed Poirier. It was Poirier who landed the damaging blow, a left hand midway through the second round that staggered McGregor against the cage. That set off a Poirier flurry that dropped McGregor, stunning the crowd at Etihad Arena. The TKO came at 2 minutes, 32 seconds.

"I need activity, guys, c'mon," a humbled McGregor said. "You know, you don't get away with being inactive in this business, and that's the way it is. So I'll take my licks."

McGregor had told ESPN's Stephen A. Smith on Thursday that he'd like to fight seven times over the next year and a half. Never mind that's as many fights as he has had since the summer of 2015. If McGregor competes at anywhere near that pace moving forward, it stands to reason he'll be sharper.

Will ramping up his activity level be an elixir for the 32-year-old? Time will tell. But while he looked like a faded fighter during the short time he was in the cage with Poirier, one thing is sure: McGregor will not be treated like one by the UFC.

For most fighters, a bad loss in the cage is perhaps best symbolized by the cruel sound of a door slamming in their face. The glories they've been storing away for their imagined future are suddenly inaccessible.

But McGregor plays the game of mixed martial arts differently from most fighters. He situates himself where opportunities are most abundant. And even in the wake of this loss, McGregor has myriad possibilities ahead.

Defeat did snuff out McGregor's hopes of an immediate shot at regaining the lightweight championship belt he once owned. But what would have otherwise been a golden road up the mountain now could go a number of directions, all of them potentially fulfilling.

Even after a decisive defeat, McGregor is enough of an asset that the UFC will be looking for ways to inject him right back into the mix of contenders in the UFC's stacked lightweight division. But will McGregor view that as his best path forward?

Three and a half years ago, while McGregor was reigning as the UFC's first two-division champion, he took a detour to the boxing world for an unthinkably lucrative match against Floyd Mayweather. It was the beginning of the end of McGregor's run as a UFC champ -- he would be stripped of both his featherweight and lightweight belts by the spring of 2018 for inactivity -- but it made him a richer man and earned the UFC a big payday, as well.

Today, McGregor is managed by the same outfit that manages Manny Pacquiao, so if a return to boxing is what McGregor wants, that is a fight that likely could be made. With McGregor not in the title picture or stalling the momentum of any other fighters or divisions, the UFC probably wouldn't mind cashing in once again.

McGregor can go the spectacle route in MMA too, by completing his trilogy with Nate Diaz. It would be a big fight, in terms of the attention it would grab, but one thing it would not be is a legitimate steppingstone back to title contendership. Since the two meetings between these men in 2016, Diaz has competed only twice, most recently in a 2019 loss to Jorge Masvidal. But Diaz might never stop generating interest among fans.

In his interview inside the cage moments after Poirier had knocked him out, McGregor did not sound like a fighter looking for another detour. If he does indeed have the drive to work his way back to the sharpness necessary for a title run, it would appear McGregor's immediate future revolves around the fate of another old rival, Khabib Nurmagomedov. The UFC lightweight champion announced his retirement in October and reiterated several times this past week he has no plans to return to the Octagon.

If Nurmagomedov's belt goes vacant, it would likely be put up for grabs in a fight between Poirier and newcomer Michael Chandler, the former Bellator champ, who knocked out Dan Hooker in the UFC 257 co-main event. That is the potential matchup UFC president Dana White said makes the most sense during the postfight press conference.

That scenario would leave Charles Oliveira, winner of eight in a row, as the odd man out in the lightweight division. Might McGregor be interested in facing the man with more submissions than anyone in UFC history? A win over the Brazilian fighter could thrust McGregor right back into the title picture, but would that fight go any differently for McGregor without more time in the cage?

Then again, McGregor can get a date in the cage with whomever he wants -- be it Diaz, Justin Gaethje, Tony Ferguson or anyone else. That's how much the UFC values McGregor. Even after he was smoked at UFC 257, a booking with McGregor remains a winning lottery ticket. Practically any fighter on the UFC roster would jump at such a lucrative opportunity.

So long as Conor McGregor truly wants to be more active, he isn't going to have a hard time finding dance partners.