Ariel Helwani: Not the type of ending anyone wanted

How depressing was that?

I mean, I really can't decide whom I feel worse for at the moment: Belal Muhammad, who just suffered what appears to be a gruesome eye injury in the biggest fight of his life, or Leon Edwards, who had his first fight in 19 months end in a no contest after he looked quite good in the first round.

Ugh. What a bummer.

It goes without saying that we hope Muhammad has a full and quick recovery. Aside from the injury, the worst thing about this is the inconclusive nature of it all. 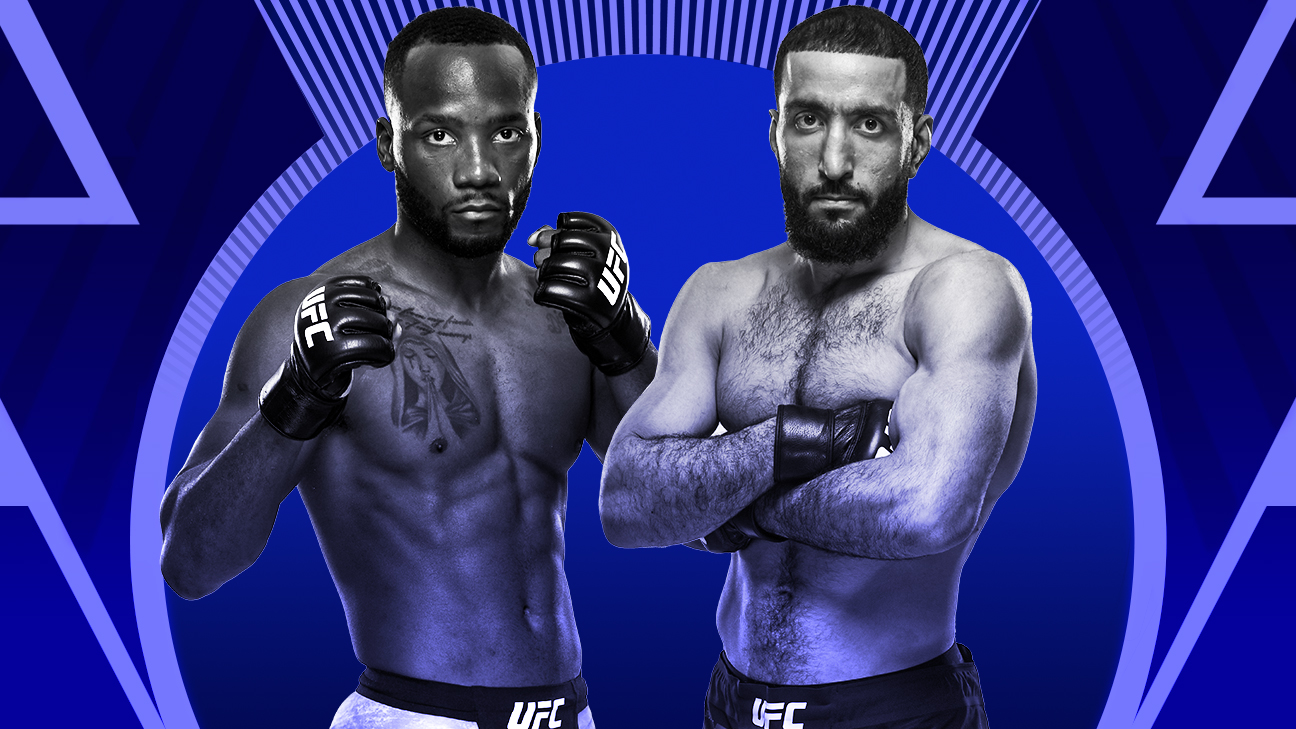 All fights from UFC Fight Night: Edwards vs. Muhammad will be available to watch on ESPN+.

The main event of UFC Fight Night in Las Vegas was supposed to be the fight that would either cement Edwards as a No. 1 contender or not. Instead, while he's on a nine-fight unbeaten streak, he's stuck in limbo. Do you now move him on to someone like Colby Covington, or do you have him run it back with Muhammad? Hard to say. The one thing you can't do, in my opinion, is justify a title shot, which Edwards was campaigning for after the fight. How weird would that be?

Sure, I said last month I didn't mind if Edwards got a title shot once Khamzat Chimaev pulled out of their scheduled fight, but after an eye poke like that, which, for the record, I believe was absolutely unintentional, it would be strange to have Edwards fight for the belt next. And that's unfortunate because I think a title shot could have been easily justified had he won Saturday night, and it was looking like he was going to do so early on.

Just a crummy situation all around.

"I have worked my way back up from last getting defeated by Kamaru Usman. I have fought everybody, I have offered to fight everybody."@Leon_edwardsmma believes he deserves a title shot next. pic.twitter.com/kvuLoLg1cb

What I would do now for sure is this: Address these gruesome eye pokes. They aren't going anywhere unless the UFC and/or the sport of MMA as a whole decides to modify the gloves once and for all.

The promotion was looking into changing the gloves a few years back so that the fingers were curved more, but that never came to fruition. Famed MMA coach Trevor Wittman has also developed gloves that he believes would dramatically eliminate pokes, but they haven't been adopted yet. Why not? No one seems to know for sure.

Like any sport, it would be nice to see MMA evolve in this regard because no one wants to see another scene like the one we saw Saturday night.

Brett Okamoto: Who should be next for Edwards, Muhammad

Who should be next: Colby Covington

Can't believe that just happened. Edwards came back after nearly two years off, and the result was a no contest. The worst. Yes, it was his responsibility to not commit the foul, but we also know eye pokes are an unfortunate part of this sport. Just a terrible outcome for Edwards. Here's what I'll say, though. Give him the fight he deserved anyway. Let's just pretend like none of this happened and book the right fight. Edwards vs. Covington is the right fight. It makes sense on every level. This is where we probably should have been on Saturday anyway, so book it for a Saturday in the spring.

If the UFC is unsuccessful in booking Usman vs. Jorge Masvidal, a title shot for Edwards really does make sense. I know it probably sounds like an odd thing to say following Saturday's result, but I'm not going to let the disappointment over what happened in the main event overshadow the fact that Edwards had won eight in a row prior to the no contest. That was the longest win streak in the division outside of the champion's 13 in a row. He's been willing to fight any other contender, and they've all turned him down. If he somehow ends up in a title fight next, it won't be how anyone drew it up, but it would still make sense.

My heart is shattered my first main event ended like that but Gods the best of planners im sorry to the fans and the @ufc you deserved a full fight.. Alhamdillah the vision is coming back and no permanent damage to the eye I'll be back and want to run it back @Leon_edwardsmma pic.twitter.com/5xsvhmZ5Uh

Who should be next: Li Jingliang

First and foremost, let's hope we get good news on Muhammad's eye. That's obviously the No. 1 priority right now. Moving forward, I think you treat this exactly like it is: a no contest. It basically didn't happen. Muhammad stepped up and took an opportunity, and you can't even really say he came up short. There was no result, even though Edwards did appear to be in control of the fight as long as it lasted. But if it's up to me, you move on with Muhammad just as you would have had this opportunity never come up. He called out Jingliang after his most recent fight one month ago, and it made sense. It still makes sense.

Brady picked up a nice win over Jake Matthews one week ago at UFC 259. He's building quite a name for himself in this division, and he and Muhammad were already scheduled to fight once before on Dec. 19. It's an intriguing matchup, and it's two guys who are right next to one another in the official UFC rankings.

UFC 259 featured one of the most controversial finishes to a title fight in UFC history. Petr Yan, the defending bantamweight champion, blasted Aljamain Sterling with a blatantly illegal knee in the fourth round. Sterling, after eating that knee while he was on his knees, was unable to continue, and referee Mark Smith ruled the bout a disqualification. Sterling became the bantamweight champion in a rather bizarre fashion.

On Saturday night, there was a similar circumstance, as Eryk Anders nailed Darren Stewart with an illegal knee in the first round. Stewart had one knee down, and Anders landed a hard knee to Stewart's head. With Stewart rocked and unable to continue, referee Herb Dean ruled the bout ... a no contest.

So, what was the difference? The only difference was that Yan's foul came in the fourth round. Since it was after the third in a five-round fight, a fight-ending foul cannot be a no contest -- only a disqualification, or it goes to the judges for a technical decision. Smith determined that Yan's knee was intentional. Therefore, per the MMA unified rules, the bout was called a disqualification. In the case of Anders on Saturday, Dean determined that it was not intentional, and the foul came in the first round, meaning the bout result was a no contest.

As long as ppl with a brain of reason can see the difference https://t.co/D56C1Pra42

The Yan and Anders knees were very similar, but two referees interpreted them in different ways. The word in question here is "intentional." But let's be real here. When someone throws a knee, it's usually intentional. It's not like an eye poke or a low blow. But in Dean's case Saturday, he likely felt that Anderson was not intentionally trying to commit a foul with that knee. Of course, one could say the same thing about Yan, yet Smith went in the other direction. Why would Yan, who was pulling away in that fight, intentionally try to commit a foul? It doesn't make sense.

The issue here isn't with the referees. They are given leeway to interpret the rule and make a tough decision in the moment. Really, the written language of the rule should take the choice out of the referee's hands. It should be more black and white when it comes to knees.

It's not an easy fix. The last thing you want is a fighter down on the cards landing an illegal blow to escape the bout with a no contest. Disqualifications should be used more liberally, especially when it comes to illegal knees. An eye poke (which ended the main event, as Leon Edwards' bout vs. Belal Muhammad was ruled a no contest), head clashes and low blows can be incidental in the heat of action, but a knee against a defenseless opponent by fighters who are basically measuring up their blows, as Anders and Yan did? Referees should feel more comfortable about calling those a DQ.

Dan Ige stuns Gavin Tucker with a straight shot to the face that sends Tucker straight to the mat just 23 seconds in.

Jeff Wagenheim: Ige's KO was the highlight of highlights

It was not the night's fastest knockout. And unlike another of the evening's five knockouts, it did not come against someone situated higher in the UFC's rankings. But no knockout outdid Dan Ige's one-punch, 22-second finish of featherweight Gavin Tucker.

The official stats credited Ige with four punch attempts, but there really was only one. He did use his left hand to parry aside a Tucker advance, and after the man known as "Dynamite" connected on Tucker's chin with his explosive right hand, he did throw a left hand. It missed because he was trying to hit the man standing in front of him. But the man who had been standing in front of him was falling to the canvas.

If there was a fourth punch thrown, I did not see it. Tucker didn't see the last two, that's for sure.

Ige gets my KO of the Night bonus -- the check is not in the mail, Dan, sorry -- in part because of the circumstances surrounding the fight. He was coming off a defeat in the biggest fight of his career, a decision loss to Calvin Kattar last July in Ige's first UFC main event. That loss ended a six-fight winning streak. He was looking to rebuild momentum. Mission instantly accomplished.

It was a night of knockouts, and at least one knockout in progress that somehow went awry. The first fight ended in 16 seconds courtesy of a Matthew Semelsberger right hand that floored Jason Witt, the seventh-fastest knockout in UFC history. Charles Jourdain went all the way into the third round before knocking out Marcelo Rojo, and Davey Grant had a nice knockout of Jonathan Martinez. In the co-main event, Ryan Spann, No. 13 in the UFC's light heavyweight rankings, got 11th-ranked Misha Cirkunov out of there in just 1 minute, 11 seconds.

And let's not ignore that Eryk Anders was well on his way to knocking out Darren Stewart before landing an illegal knee, turning it into a no contest. Leon Edwards was in control of the main event as well, and his pinpoint punches had Belal Muhammad on his heels, but when the eye poke ended it as another no contest, Edwards was not on the verge of a KO. But Anders sure was.

Still, that one-punch beauty by Dan Ige was unsurpassed. And for his effort, he did receive a $50,000 peformance-of-the-night bonus.