Michael Jordan is the greatest of all time, topping our All-Time #NBArank list of the 100 best players ever.

To create All-Time #NBArank, we put together a ballot with the 150 greatest players ever. Then our ESPN expert panel voted on thousands of head-to-head matchups, with voting based on both peak performance and career value. The result is our all-time NBA Top 100.

We counted down the greatest players in NBA history. ALL-TIME #NBARANK

Did you know?
In the 11 seasons in which he played at least 20 games with the Bulls, Jordan finished in the top five of MVP voting 10 times. The exception? His rookie season, when he finished sixth. And in the playoffs, going strictly by seeding, MJ's teams were never upset. Against teams seeded the same or lower, Jordan's teams had a perfect 24-0 series record. -- ESPN Stats & Information

Here's the thing: Bird's famous statement about Michael Jordan is not the one that defines him or his career. MJ's "love of the game" clause does.

Jordan had the provision written into his first contract, allowing him at any time, any place -- playground, rec center, backyard, arenas, stadiums -- to pick up a basketball and just ball. Those words speak more to his game than the 63 points he put on Bird and the Celtics in '86 that became his warning to the world of what we were all about to witness during the next 13 seasons.

And that love ran deep. Unconditional. Often parallel to his addiction to competition, his need to win and his almost inhuman (or inhumane) ability to use losing to make himself -- and others around him -- greater.

Be like Mike? He left room for others to come close. But could you be like him as often? As consistently?

All due respect to Wilt, Kobe, LeBron, Steph, Magic and all other players who fall below Jordan's No. 1 position on this list, but what set Jordan apart was his ability to follow up his own "God-like" performances with something greater the next game, the next series, the next season. And that more than anything -- more than his talent, more than his desire, more than his will, his insane 30.1 PPG scoring average and 27.9 PER, his overall winning percentage, his six rings and the fact he has become the true measure of greatness in sports -- is the Sum of Jordan.

That, and the fact that he balled so large that Bird's "God" comment actually became an afterthought. 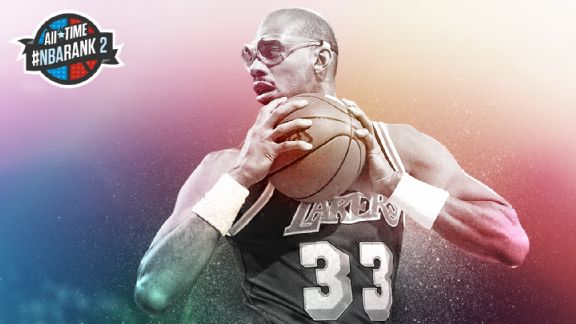