Already? It's over? Nearly six months have passed since Super Bowl LIII, which means the NFL offseason is drawing to a close. And it means it's time for NFL training camps and the beginning of the 2019 season.

What has happened in the interim? Let's get you caught up on the comings, goings, rule changes and general controversies of the spring and summer months.

Owners approved a precedent-shattering expansion of replay in response to a massive officiating gaffe at the end of the NFC Championship Game. Coaches can challenge both offensive and defensive pass interference calls -- or no-calls -- and the replay official can stop the game to review them during the final two minutes of each half and overtime. The rule is in place for one year only, after which owners will decide whether to tweak it, discard it or make it permanent.

The NFL now will be able to correct obvious mistakes, but there is genuine fear that it will veer too far into the gray area of every-down contact between receivers and defenders. The potential frequency of late-game stoppages by the replay official is also a legitimate concern. 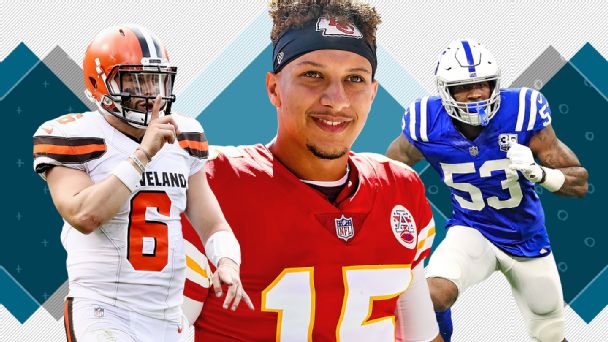 The Arizona Cardinals' decision to make the 5-foot-10 Oklahoma quarterback the No. 1 overall draft pick symbolized a major change in league thinking. Teams have rarely employed quarterbacks with similar height. According to the Elias Sports Bureau, only five QBs who are 5-10 or shorter have thrown a regular-season pass since 1960. (Murray measured 5-9 7/8 in the summer of 2018 and 5-foot-10 1/8 during the combine in February 2019.)

Murray's spot at the top of the draft illustrates not only his dynamic playmaking ability but also a less rigid definition of quarterback makeup as teams scramble to find talent at the position.

3. Five teams change quarterbacks ... and one more isn't far away

In addition to the Cardinals replacing Josh Rosen with Murray, these teams procured new passers who should start soon if not immediately:

Who has the NFL's best roster?

Jeff Saturday, Tim Hasselbeck and Dan Graziano make their picks for the NFL team with the best roster right now.

The Giants' surprising offseason wasn't limited to their infatuation with Jones. Earlier, they consummated a series of trades that sent Beckham and pass-rusher Olivier Vernon to the Cleveland Browns for guard Kevin Zeitler, safety Jabrill Peppers and a series of draft picks, including No. 17 overall in 2019. The Giants lost patience with Beckham even after signing him to a contract extension last year that included $40 million in full guarantees. Here are some other notable offseason trades:

5. The Steelers bid farewell to two of the three B's

After years of acrimony, the Steelers traded receiver Brown to Oakland and let running back Le'Veon Bell leave via free agency (New York Jets), making quarterback Ben Roethlisberger the only remaining member of a trio they had hoped would lead them to a Super Bowl championship. And they took an incredible hit to do it, most notably absorbing Brown's $21.2 million cap charge for 2019.

The Steelers hope that receiver JuJu Smith-Schuster and running back James Conner will be cheaper, less disruptive and near-equally productive replacements.

Dan Orlovsky commends Ben Roethlisberger for clearing the air of talk about Antonio Brown and Le'Veon Bell, but fears the Steelers could struggle without them.

The Super Bowl LIII champions lost two key players to massive contracts in the March free-agent market. Left tackle Trent Brown signed a deal that will guarantee him $36.25 million over the next two seasons with the Raiders. Meanwhile, defensive end Trey Flowers went to the Detroit Lions for a guaranteed $40 million over the next two seasons. Other notable (non-quarterback) free-agent moves included:

Patriots tight end Rob Gronkowski, a future member of the Pro Football Hall of Fame and one of the liveliest characters in modern league history, announced the end of his career. Rumors have circulated that he would consider rejoining the team during the season, and he has worked out with Patriots quarterback Tom Brady this summer, but as of now, he appears set to move full time into the entertainment industry.

Which retired players will the NFL miss this season?

Dianna Russini, Victor Cruz and Mike Tannenbaum explain why Rob Gronkowski, Doug Baldwin and Max Unger will be missed on the field heading into the 2019 season.

The Seahawks quarterback took the mantle as the NFL's highest-paid player (for now) by signing a contract extension that would pay him $140 million through 2023. In the process, Wilson decided against pursuing a structure -- with full guarantees or perhaps one tied to salary-cap fluctuation -- that would have upended the market in a more fundamental way. It wasn't his obligation; at 31, Wilson ultimately would have had the leverage to pursue anything he wanted. Other notable contract extensions included:

That flurry still leaves three quarterbacks with contracts that expire after the season: the Patriots' Brady, the New Orleans Saints' Drew Brees and the Los Angeles Chargers' Philip Rivers.

The Cardinals' Pro Bowl cornerback will miss the first six games of the season after violating the league's performance-enhancing drug policy. They will be the first regular-season games he has missed since entering the NFL in 2011, as he has made 128 consecutive starts. But he's not the only one facing suspension.

The NFL mulled discipline options for the All-Pro Chiefs receiver after his fiancée accused him in an audio tape of abusing their 3-year-old son, who had suffered a broken arm. Ultimately, the NFL could not identify a violation of its personal conduct policy.

Hill has not been charged with a crime, but he met with NFL investigators for eight hours on June 26. NFL policy makes clear that players can be punished even in cases where there was no criminal conviction. Hill is free to report to training camp, practice with the team and play in preseason and regular-season games.

The NFL was forced to replace three more referees, bringing the total to seven in the past two years, and 11 (of 17) in the past five. A transition was expected due to a number of veterans nearing retirement age, but the process accelerated when three referees resigned to join television networks. The collective brain drain will have an effect, especially in an era of quick-turn rule change, midseason tweaks and the apparent end of the full-time program. Officiating once again will be a major storyline in the NFL this season.

Diagnosed concussions dropped nearly 25% from 2017-2018, halting a rise that had deeply concerned league officials and spawned a wide-ranging plan of action. The reduction coincided with the introduction of two new rules: a prohibition of lowering the helmet to initiate contact and a redesigned kickoff. Additionally, certain helmet models will be banned in 2019.

Although few teams use it anymore, the league recommended that they dispatch it -- along with several other high-contact drills -- from their list of possibilities. The request was spawned from medical data that showed a high rate of concussions early in training camp, especially among linemen. Presented with the data during a meeting in April, a group of current and former NFL players, coaches and executives recommended the change.

The league's collective bargaining agreement with players is set to expire after the 2020 season, leading to a series of meetings between the sides beginning in April and continuing into the summer. Owners are motivated to extend the deal before the 2019 season begins, in part due to their celebration of the NFL's 100th season and also looming negotiations with their broadcast rights holders. Players are in less of a rush but are willing to find out what, if anything, owners might be willing to concede in order to get an early agreement.

Tea-leaf readers continued to fret about the future of the Rams' tailback, who did not participate in the team's offseason field work. When you add that absence to his limited role at the end of the 2018 regular season and during the playoffs, there is genuine reason for worry. The Rams have refused to address reports that Gurley has an arthritic condition in his knee. Is he ready to resume his role as an every-down back? Or has his career permanently downshifted, one year after he signed a contract extension that will pay him $27 million by the end of this season? Perhaps training camp will provide those answers.

Absent an agreement on a major contract extension, the Chargers' running back plans to hold out from training camp. Gordon's hard line is understandable. He's 26 years old and has accumulated the second-most touches in the NFL (1,079) since entering the league in 2015.

The Chargers now face a difficult decision. Should they accommodate Gordon to maximize their current Super Bowl window? Or should they move on with a cheaper and younger rusher?

Adam Schefter breaks down the situation between Melvin Gordon and the Chargers after the running back demanded a trade if he doesn't get a new deal.

At least one other potential holdout looms over the opening of camp: Houston Texans pass-rusher Jadeveon Clowney did not sign his franchise-tag tender, and he is expected to miss most, if not all, of training camp.

17. The Jets are greener than ever

The Jets will have new uniforms for the first time in 20 years. Gone are the white helmets, replaced by a customized shade of green created by Nike. It's called Gotham Green. (Get it?!) The Jets' other colors are known as "spotlight white" and "stealth black." For anyone who forgot the team's nickname, the uniforms will have a design that resembles a jet's flight trail on the shoulders and down the pant legs.

Seemingly every owner wanted a piece of what McVay has brought to the Rams. In two seasons, he has coached the team to as many regular-season wins (24) as any other NFL team while also guiding them to an appearance in Super Bowl LIII. Along the way, he has resurrected quarterback Goff from a disastrous rookie campaign with a creative offense that has led the league with 31.4 points per game over that span. As a result:

After putting up an exceptionally fierce facade of disinterest, the Raiders were assigned to the popular HBO training camp documentary. There will be no shortage of material, from coach Jon Gruden's legendary long hours to a lively roster that includes Antonio Brown, linebacker Vontaze Burfict, quarterback Nathan Peterman, offensive lineman Incognito and safety Lamarcus Joyner. Odds seem high of an early scene featuring Gruden reporting to work before 4 a.m.